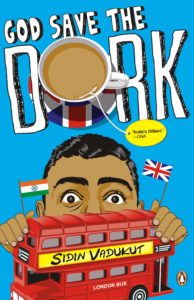 God save the Dork is a sequel to the Vadukut’s “Dork: The incredible adventures of Robert “Einstein” Varghese”. Having not the read the 1st one, I did not what the storyline was, but was promised a lot of laughs going by the popularity of the first book. However, God save the Dork turned out to be a major disappointment, both in terms of story as well as humour quotient.

When I started reading the book, I was fully aware of the fact that I had no idea what happened in the first book. However, there were multiple references to incidents from the previous book, to the point of irritating the reader. When reading a sequel, one would only want a fleeting reference to what happened in the past rather constant reminders that you haven’t read the first book.

In “God save the Dork”, the protagonist Robert “Einstein” Varghese is given a promotion and sent to London after a voicemail controversy. Even in London, he continues on his funny mess-ups, with his multiple failed attempts at wooing an intern in spite of being married as well as his microphone incidents bringing out the biggest laughs. You will also laugh at his anger in having to help Sugandh after he was caught for illegal downloading. There are other such funny incidents in the book that will definitely bring a smile to our face.

However, as you continue reading the book, you will find that the humour is forced and you feel that the author is trying too hard to make you laugh. With there not being a solid storyline to the book, the attempts at humour become all the duller and do not contribute in entertaining the reader. In the end, you would want to finish it as quickly as possible as it is no longer entertaining.

That being said, humour is one of the most difficult subjects to write on, and the author tries his best to get the reader laughing. While I would not recommend this for a train journey, if you have a day off and have nothing to do, you can always curl up with this and have a decent laugh on the clumsiness of Robert “Einstein” Varghese.