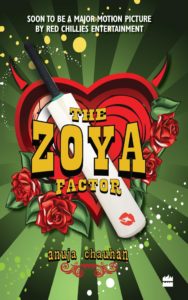 Statutory Warning: Don’t read this book in public. You will laugh so much, people will think you are mad.

Cricket is one of India’s biggest craze and is considered a second religion by many.

Not many books have been written on the subject in India. Even the few which are still in print, are biographies of cricketers.

The Zoya Factor written by Anuja Chauhan, with a colourful cover and an exciting blurb, promised to be “zara hatke” because it is a comedy with cricket being its central theme. That is the reason why I read and have reviewed this book.

The book, written in the first person, describes how a cricket-hating ad-executive, Zoya, is forced to become a part of the Indian cricket team, not as a player nor a cheerleader nor a physiotherapist nor a psychiatrist but as a lucky charm.

Yes. Zoya was born on 25th June 1983, at the exact moment when Kapil’s India won the Prudential World Cup. Since then, she has been very lucky as far as cricket is concerned and whichever team has a meal or a drink with her before any match, ends up winning the match.

When the IBCC, India’s cricket board, discovers this, she is cajoled into accompanying the Indian team to Australia and help them bring back the cup.

But the Indian captain, Nikhil Khoda, believes more in hard work than in dumb luck and so, always ends up fighting with her.

After her unblemished record, she is targeted by the International media who believe that India has an unfair and unnatural advantage.

The rest of the story is about whether a simple girl like Zoya can handle these pressures and help Team India win the world cup.

The story is outright funny, right from page one till the climax.

The author has made brilliant use of funny one-liners which keep the comedy running.

The scenes between Zoya and her friend Monita are side-splitting. Each and every character makes you cackle like crazy. The deliberate use of “hinglish” and “butler english” only takes the humour a notch up.

The author has truly nailed it as far as the humour-quotient is concerned. The plot does not have much to talk about. It is simple yet interesting.

But, it is dialogues which make the book so funny, not the plot.

The characters are hilarious. Each character is different and funny in their own way.

There is one negative factor which I would like to mention – the scenes between Zoya and Nikhil Khoda, the captain.

They fight and soon patch up. This happens around 5-6 times, overall, in the book which is actually pretty annoying considering the flow of the book.

These are big turn-offs. Because of this, I could not read the book in one go.

In conclusion, I would say, do not take the statutory warning, given in the beginning, lightly. I mean it.

I started reading The Zoya Factor on my office bus and the constant glares my colleagues gave me was justified because I was LOLing every few minutes.

This mostly summarises how much I enjoyed reading this book. I would strongly recommend this book as a must-read.