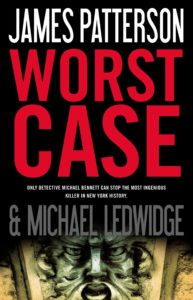 “Worst Case” is my first James Patterson book. I’d heard so much about him and his books that I decided to give it a try.

I must say, though this story would be excellent to watch on the big screen, as a novel it didn’t appeal much to me.

But, I would certainly read more of his novels and then come to a conclusion whether to read him or ignore him.

The plot of this book revolves around a serial kidnapper/murderer who targets the kids of the uber-rich families of New York.

The killer is a pseudo-socialist and his modus operandi is to kidnap filthy-rich kids, give them a test on social awareness & if they fail, kill them. The investigation into these murders is led by Detective Michael Bennett of the NYPD.

But due to the increase in the number of murders & the social status of the victims, Agent Emily Parker of the FBI is brought in.

This book is written with a pre-tested formula in mind: a good cop with baggage, a damaged & gorgeous female cop and a villain who always wins.

The story turns around when one kid passes the test and is released without harm. This is the first major break for Bennett & Parker in the case. Then the story is mostly about how the cops uncover the identity of the killer & bring him down.

The major reason why this book fails to be gripping is that the identity of the killer is revealed in the very early stages of the plot.

From there on, the plot becomes pretty straight-forward without the regular twists-n-turns you would expect in a murder mystery novel.

I loved the character of Bennett. He is a single father, with 10 adopted children of different races, an attractive live-in nanny, a fun-loving Irish grandfather and a cat.

This is the third novel in which he is the protagonist and I would certainly read the earlier two, just because of him.

I loved the way the killer was portrayed until his identity was revealed. Agent Parker, too, has a major role in the plot. She is pretty, smart and not the regular-arrogant-FBI-types.

The strongest point of the book is the climax. Though I cannot go into further details, I would be right in saying that the climax makes up for all the negatives in the book.

It is totally unexpected & comes as a major surprise even though you know who the killer is.

Would I suggest reading this book? I certainly would. Not as a murder mystery but as a story with a good plot, strong characters & a great climax. Read the book to know:

“Who is the killer?”

“Why is he targeting only the rich kids?”

“How does the story end?”