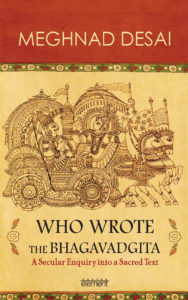 The Bhagavad-Gita, along with the Vedas and the Upanishads, constitutes a basic triad (prasthanatrayi) of the Hindu religion. It is by far one of the most sacred among Hindu religious texts. It forms the foundation for most of the ideologies of Hindu religion and is also one of the most important reasons why Hinduism is what it is today. The Bhagavad-Gita is a conscience keeper to many, acts like a compendium to many, and is the source of inspiration to many. It is one of the most widely translated and read books in the world. Yet, the story of its divine origin and authorship seems a bit far stretched to modern readers. Meghnad Desai, in his book Who Wrote the Bhagavadgita, makes a secular inquiry into the sacred text, and in the process, tries to unravel the identity of its author.

Who Wrote the Bhagavadgita begins with giving a brief background about the text and its importance during ancient times and modern times as well. It tells us how the Gita was used as a uniting factor in our freedom struggle, and as a weapon for the anti-colonial struggle. The commentary made by many famous people – Vivekananda, Tilak, Gandhi, Ambedkar etc. on the Gita is briefly explained. He also writes about the evolution of Jaya to Bharata and then to Mahabharata.

After this brief background about the Gita and its relevance in Hindu society, then and now, Meghnad Desai delves into the question on which this book is based. He mainly uses G.S. Khair’s ‘Quest for the Original Gita’ in drawing his own conclusions. Using the change in style and context across the Gita, Meghnad concludes that the Gita was written by not one but three different authors at different times. He also tells us which verse in the Gita was written by which author; of the total 700 verses, the first author wrote 126 verses, the second author 119 verses, and the third author 455 verses.

The styles used by the three authors, the motives behind their writing and their intended audience is well explained. The first author wrote during the pre-Buddhist times, around 600 BCE, and mostly for a learned and high-class audience. The principal philosophical issue is sanyasa and the solution is karma-yoga. The second author was a contemporary of Buddha, and his audience too is the learned class. The philosophical issue is karma and the solution is sattvikatva. The third author is the editor and the final arbiter of the document and is dated to be around 300-300 BCE. His audience is the ordinary people and his writing is motivated by the need to spread Brahmanism and counter Buddhism’s popularity. The philosophical issue is ‘diverse creeds’ and the solution is bhakti. To know the identity of these three authors I advise that you read the book.

Though the proposed question in Who Wrote the Bhagavadgita is interesting, Meghnad has used very few and selected works for his research. In fact, most of the conclusions drawn by him are based on Khair’s research. A little more independent inquiry would have better helped in answering this interesting question.

Many readers find books on religious and philosophical subjects to be boring and similarly this book is not for every bibliophile. But if you are interested in world religions, and would like to know more about Hinduism and the origin of the Gita, this book is definitely worth reading.

Please let us know what you think about the book or the review in the comments below.