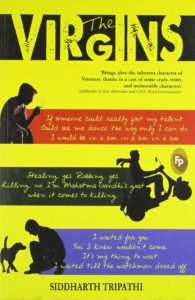 In the first look, The Virgins did not appear to be of my preferred genre; so when I received the review copy, I was a little apprehensive about the book and to add to my great dismal the cover did not do much to cheer me up. But contrary to my belief, when I started reading it, I found it to be quite a “surprise-package”. Before this, I had never read a book based in Banaras and when this one came through I found it quite interesting. The city, the descriptions, all amused me a lot. It created an aura around Banaras, which, as I am penning this review down, still continues to overwhelm me.

The plot of The Virgins revolves around three central characters – Pinku, Bhandu and Guggi. They are young, mischievous and in the process of transforming from boys to men. Pinku is the only son of the mother of seven young children whose husband abandons her one day, only to come back after almost 10 years and again desolating her after stealing the hard-earned money she had saved for her eldest daughter’s marriage. Bhandu is the dumbest child his family of third generation professors could have ever produced.

But this is not all that can go wrong with him; to add to his woes, his Professor dad had left his mom & also abandoned his poor soon to relish the company of a “firang” woman. While these two poor souls would struggle through each inconsequential day of their existence, their friend Guggi couldn’t have asked for more; born with the proverbial silver spoon, an influential & rich dad and numerous people always at service, life for Guggi was as good as it can be, yet he was always bent upon spoiling it by constantly planning his “sexpot” adventures.

The Virgins goes on as Guggi continues to plan his indiscreet escapades and drags both his friends into his diabolical tactics. The novel moves along at a steady pace and is a pleasure to read at all the points, though, what truly moved me were neither the funny adventures nor the steady plot, it was the end. In my view, the end was supremely well crafted with the plot giving away very little into what would ultimately become of the trio. All characters were beautifully defined with each of them as interesting as the other.

The characters I especially enjoyed were Guggi, Guggi’s half mad grandpa and Moods Singh. All of them were very entertaining. What surprised me most, however, was the character of Pinku. I simply couldn’t gather the depth of his character, how he transformed from the helpless hopeless lad to the decisive man, I just couldn’t fathom. Kudos to the author for his great job with Pinku..!!

But with all these positives, I also found something amiss. I believe the plot could have been a more defined or planned one. At one point, you get the feel that the plot has lost itself and has somewhere been overshadowed by the truly enigmatic characters. However, barring this one matter, I didn’t find any substantial concern with The Virgins. Sidhharth has proved his mettle in this book and I am excitedly looking forward to his next one.