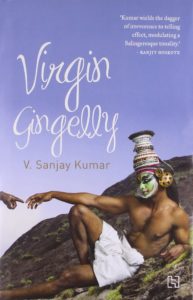 It is a common accusation among readers, this reviewer included, that what the Indian authors have to offer nowadays have either suffered from a lack of a good plot or lacks drastically in any literary value.

Many of the books available now are those that don’t really set your imagination loose or keep you rooted to the story like there was no tomorrow.

Of course, one cannot really blame the authors, considering the number of casual readers is a lot more than the serious ones. Therefore, when one comes across an author that has really put in an effort to treat writing as a work of art, the mind rejoices!

V. Sanjay Kumar’s Virgin Gingelly is a very good mix of poetry and literature that is seldom seen in mainstream books nowadays, not just in India, but from the land of the native English speakers as well.

There is no central plotline that one can try to write a synopsis about, nothing of the sort where you would follow one or two characters through their efforts at getting something that they want to, and at the end, either do or don’t.

This book is about a set of different characters who are looking to escape from the drudgery of their lives and end up featuring in each other’s stories.

The book is at once engrossing and frustrating at the same time.

Engrossing because of the way the author portrays the characters and manages to showcase even the most minor acts into something that deserves importance.

The story moves from one narrative to another, and you would see things from the perspective of different characters. But if you are expecting the story to be the same all the time, you would be in for a surprise.

The use of language is poetic and is joyous to read, no matter the trying circumstances of the characters in question. At the same time, it is not “highbrow” and is simple, once again reinforcing the point that it is not the words you use but how you use them that makes the difference.

But at the same time, the reader would find Virgin Gingelly frustrating because sometimes the narrative moves from one character to another without any warning.

And so, for a few lines, you would be in a state of confusion as to what exactly is happening, and how you managed to lose the thread.

If that was indeed the intention of the author, then congratulations are in order, as he was certainly successful. But it doesn’t do much to the reader as he/she would be forced to re-read, breaking the flow.

Also, after a certain point, one might get the feeling that the style of writing is overdone, with the stop-start sentences doing much to break the concentration of the reader.

I will be honest in saying that reading it once is certainly not enough for me to fully understand Virgin Gingelly. I will certainly have to read many times to be able to fully grasp the complete essence of the book. And that, perhaps, is the best praise I can give to the author.