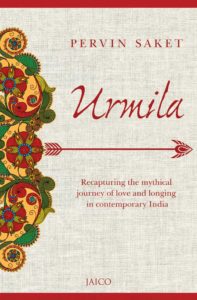 Urmila was a character in the epic Ramayana. She was one of virtue and patience and yet she doesn’t find her name mentioned besides those of the other popular characters – Rama, Lakshmana, Sita, Kaikeyi, Raavan, Hanuman, Sugreev etc. At the end of the day, amidst all the heroes, heroines and villains of that time, she was just a forgettable name; a name which was lost in the maze of time, a name who no one tells inspiring stories of. Such is the story of Urmila or maybe we have never really known her story, have we?

In this astounding piece of fictional brilliance, Pervin Saket rewrites the story of the age-old character albeit with a modern twist, in a modern setting and with modern characters. Urmila is from a humble background but she ends up getting married into a politically connected and affluent family. Her parents are also decent people who had brought up their daughter well and had also supported a parent-less girl Vani. Vani is raised as their own and as a sister to Urmila. She is the perfect daughter one can get – working day and night, helping everybody with their chores, and living humbly.

When Urmila gets hitched to Shree, Vani takes it upon herself to help her sister have the perfect marriage and manage all the chores well. In the process, she ends up winning the heart of Puru, who is the elder brother of Shree. The two get married despite opposition from Urmila’s in-laws and soon because of the incessant taunts about Vani’s lineage and roots, Puru decides to shift to Dubai. Having worshipped his brother all his life, Shree follows the suit leaving Urmila alone in Mumbai.

Days become months and months become years but Shree does not return; Urmila who once craved for love and her husband, has found solace in her art and her career. But all that is soon to change when one incident rocks her life. So what will happen to Urmila? Will she ever know love again? Will Shree return? Will Urmila forgive him? To know this and much more, read this tantalising novel today.

The author writes beautifully and with craft. The plot is so intricate and that you cannot help but marvel at her brilliance. Her writing has done judgment to the fact that “the book is a modern take on the age-old epic”. There is a lot of drama and emotion and pain; pain which is not inflicted but felt. It can be said that the book is a bit depressing but that is the beauty of it. The author reminds me of Jhumpa Lahiri, and who is to know that she might eventually become as successful as her.

The book has a very good story with a very sound plot and skilful execution. It is safe to say that this book is one of the best reads that I have read this year. Even the end does not seem like the end but a new beginning. My recommendation is, therefore, a definite yes and I urge all book lovers out there to must try this novel.