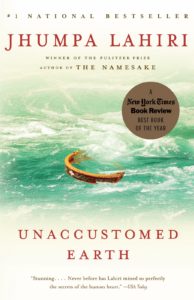 Hailed as one of the best known authors of today, she is a celebrated recipient of the Pulitzer Prize for fiction in the year 2000. Though named Nilanjana Sudeshna, she loves to go by her nick name, Jhumpa Lahiri. She was born to Indian immigrants of Bengali origin in London and grew up in Kingston, Rhode Island. Her books, The Interpreter of Maladies, The Namesake and Unaccustomed Earth have been huge successes. Her works center on the portrayal of Indian immigrants in an Un-Indian world. Her themes are subtle and relate to the most realistic and humdrum facets of life.

This book comprises of a number of short stories, and is divided into two parts. Five short stories make up the part 1 – Unaccustomed Earth, A Choice of Accommodations, Only Goodness, Nobody’s Business and Hell-Heaven. Part two is a set of three stories with same characters but different stories referring to different periods of their lives.  The stories are unique in plot and characters, with the only constant being the Bengali immigrants caught in between an Indian upbringing and a life in the western world. The way the book appeals, is not in the compactness and uniqueness of the plot but in the way the emotions resonate with the sentiments of a lonely spirit which is frequently caught in between passion and survival.

The stories are about Indian expatriates in America. These expats are people who left India for the want of better life and better jobs, or from the need to run away from their past lives, or people who have been dragged to a new way of life as a result of choices which their parents made. One major similarity between the characters in most stories is the sense of lost Indian-ness. They are Indians and yet they are so far from anything Indian; the color of their skin and facial features stand as the only proof of their roots. Inter-cultural marriages and the glamour of the western way of life is a factor which sways them further away in the direction of homelessness.

The best story in this collection is the story of Hema and Kaushik in part 2. The three stories have same characters with Hema and Kaushik as the lead ones. They meet when Kaushik’s parents come back to America after their vain struggle to settle in India. Till the time they find a new place to stay, they decide to stay with Hema’s parents who are friends from their previous years in America. The story takes on from that point and ends with Hema settling in for an arranged marriage and Kaushik losing his life in an unknown land. The stories, though so flawlessly intertwined with each other, are so drastically different that one could not help but admire the might of the author’s words and imagination.  Overall, I would rate Unaccustomed Earth as five stars and it is my humble request that it be read by every literary enthusiast.