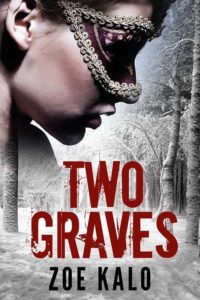 On the first look, it is the cover and the blurb of “Two Graves” that allures you. The cover looks intriguing and the blurb promises a lot of thrill with something sinister lurking in between. The concept for me, was a definite winner but was the execution too? Read on to know more about the book and whether it did enough justice to its tantalising cover and the seductive blurb.

The story of “Two Graves” is about a young musician Angelica whose only motive for a living is revenge – revenge for her three-year-old son Shaun; the one whom she loved dearly and the one whom she almost brought up single-handedly with the help of her mother. Shaun’s dad and Angelica’s boyfriend Tyler who himself must have been in his early teens when Shaun was born, long abandoned the mother-son duo by succumbing to parental pressure. Angelica herself trying to win a music scholarship thus brought her son up with the help of her Puritan mom.

Fast forward seven years and now Angelica is all alone, at an after-concert masquerade party seeking blood. She does not fear death and is ready to do all that it takes to bring justice to her son. So what will happen? Will she succeed in her revenge?

The story has a good plot and a good narration but what it lacks is good planning. There are many loose ends in the story and that is one thing which as a reader will annoy you the most. The beauty of a thriller lies in first creating a curiosity in the minds of a reader, and then manipulating and dragging it till the end and finally satiating it with an outstanding twist or conclusion. Two Graves, in this case, fails miserably at that. There are a lot of questions left unanswered in the book; essential questions like – How? When? And Why? Questions which definitely demand explanation and elaborations.

Zoe Kalo’s narration is gripping and beautifully descriptive. There are a lot of descriptions of music and references to Dante’s works, so if you are a fan of either of the two, you will no doubt love what you read. The descriptive writing does a very good job of bringing alive the people and the places but that in no way is a compensation for the lack of a rational and fitting closure.

The story switches frequently between the present and the past which helps in keeping the read fast paced and action driven. The fact that almost half of the story happens in a masquerade ball where everyone is disguised also adds an element of mystery to the whole package. But what is the point of all this when the reader is not rewarded with answers in the end? Well, I for sure wasn’t happy.

Having said all this, I still think “Two Graves” can be recommended as a different kind of read. It is just over 70 pages and that is a very good reason why a reader might want to give it a try. I end this review by rating the book three out of five stars and recommending it as a “try something new” read.