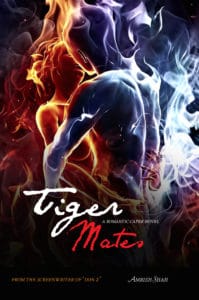 “When two soul mates unite with equal daredevilry, against cruel circumstances, and fight their inner demons only to discover their true calling, they are destined to be Tiger Mates. Says who, says me. And I am fate.”

On the outset these ordinary looking lines may not appeal to a reader’s mind but their true worth can only be known when the readers go through the entire novel which these beautiful lines very aptly conclude. The story of the Tiger Mates and their journey through hell is one which I will recommend to all my readers to experience. The reason behind such strong endorsement is the fact that the author has done a remarkable job of narrating the tale which brings together the perfect cocktail of romance, action and adventure in a matchless fashion.

Shyla is a young lady working with an NGO in Capetown, South Africa whose world is shattered when she realizes that her dying father is not her real one and that she is actually the daughter of a militant rapist who manipulated and abused her young mother in the Maoist controlled jungles of Chhattisgarh, India.

Neil is the carefree loner and thrill seeking illegal smuggler-trader who having lost both his parents at a very young age, later lost the only family he had when his brother was killed in an ambush attack by the Maoists. Ever since then, Neil has harnessed a dangerous hidden agenda of his own – that of vengeance.

Both Shyla and Neil in their quest meet in the jungles of Chhattisgarh and from the moment they meet they know that there is something between them – some mysterious vibe which they don’t have any control over and which constantly makes them seek the company of the other.

Both Neil and Shyla have a motive that treads through a treacherous way. So will they both succeed in their agendas? Will they ever find their true calling? Will the spark ignite and will they ever become true Tiger Mates? Well, to know this and much more about the interesting journey of Neil and Shyla, go buy this book today.

The book is the perfect combination of action, thrill, adventure, romance and a little drama. The story is fast paced and at many points seem like a very fast paced action movie. The characters are such which will leave an everlasting impact on you, and I say this not just about Shyla and Neil but also about other secondary characters like Anand, Raghav, Purba, Kedar Singh and Debraj. The villains of the book are also very well developed and if a movie is made out of the book, I can inventively imagine Saif Ali Khan playing the role of the ruthless Kedar Singh and Big B playing the hopeless Debraj. Overall, the book is an extremely well written attempt at storytelling by a debut author who has to his credits the screenwriting of the blockbuster movie “Don 2”.

That being said, I would end this review by recommending this book to all my readers and would rate it four out of five stars.