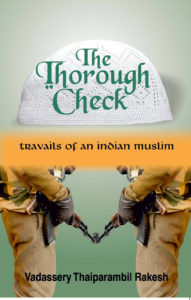 Going by the cover, the book will definitely seem hopeless to you, but what you wouldn’t realize at the time of eliminating this humble looking paperback for any of its flashier and enticing looking counterparts is the fact that behind that bland and insipid cover is a definitely good story; a story which at least deserves a single reading, a story which you will surely miss indulging in, if you choose this modest looking book. I myself was quite surprised by the difference between what I read and what I had expected to read.

In The Thorough Check, the protagonist is an undercover cop of the Kerala State Police who, along with his close friend and confidante, has been deported to the state of Gujarat by the bidding of his revered senior George Sir. The reason for this assignment is the fact that some mysterious activities had been detected off the coast of Kerala and the activities seem to be linked to some nefarious conspiracy in the state of Gujarat. The state police, being alerted, quickly readies itself to the challenge to detect and neutralise the threat which an enemy nation is planning to pose to the well-being and prosperity of its citizens.

In between all this high paced action, the protagonist, with an overly-difficult-to-pronounce-name, struggles to uncover the dreadful and evil plan as he lands himself in the enemy’s camp. In his seemingly difficult quest of exposing the enemy, he is faced with numerous problems, and plentiful tasks testing his loyalty by both the camps. Finally, with the help of his friend Appu, his mentor and boss George sir and his beloved, he fulfils his destiny and burns to ashes the grand plan of the enemy camp.

The Thorough Check is written like a fast-paced novel, and thus things move quite swiftly throughout the course of the book. I liked most of the characters, including the major ones; there was a certain depth to them and a meaning to their role. I also liked the storyline; it was quite unique and different with a definite local Keralite twist, though at sometimes I felt that the plot was getting a bit overloading and confusing. The language used is rich and the seemed to convey feelings and emotions quite well. Also interesting is the protagonist’s thoughts about ill-treatment of minorities in some Indian states, and after reading them, interspersed as they are, every now in then in the story, they definitely seem to ring a bell in the minds of the reader. What still startles me, is the fact that despite India priding itself on its secularism, there are certainly some incidents which make look back and realise that maybe we are still a long from being a full-fledged secular nation.

In the end, my recommendation to my readers is to go ahead and grab The Thorough Check, for it is a decent work of fiction and deserves your attention.