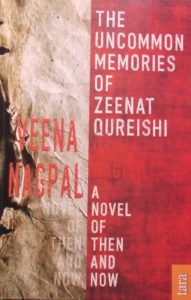 India is one of the most ethnically and culturally diverse nations in the world; a melting pot of religions. Hinduism and Islam, the two major religions of India, have co-existed peacefully for many centuries, borrowing each other’s culture, art, language and traditions. The Hindu-Muslim divide started because of the divide-and-rule policy of the British. Since then, they have always been at loggerheads. The hatred which was simmering below the surface came alive during the partition of India and Pakistan; millions died on both sides.

Even in the modern times, there have been a number of cases of riots incited by one side or the other; Babri Masjid demolition, Godhra riots, Muzaffarnagar riots, Mumbai riots etc. Veena Nagpal has woven a wonderful romantic thriller, The Uncommon Memories of Zeenat Qureishi, based on this Hindu-Muslim divide.

“It is the one nation in the whole world that has been chosen to experience am invaluable experiment – an experiment unique in the history of man – that of all religions of the world living together in one country. Hindus and Muslims, Sikhs and Christians, Parsees, Jews. You name them – they are here.

When a terrorist attack hits London, it is a bad time for the Muslims; their houses are searched unannounced, they are arrested for petty reasons, and are brutally tortured by the authorities. Fearing this, Imran sends his mother Salma and daughter Zeenat to India for a few days. India holds many sour memories for Salma; her brother and his family were brutally murdered by the Mehras, their neighbours and family friends during the partition in 1947.

In India, they are treated to a hostile environment where Hindu fundamentalists are hell-bent on demolishing mosques and building temples in their place. To make matters worse, Zeenat falls in love with Ajay Mehra, her family’s sworn enemy and a Hindu. She is tormented by nightmares of her own; nightmares of a past life, so powerful and vivid that she is able to project them. Will Zeenat’s and Ajay’s love hold strong in such a religious turmoil? What are Zeenat’s nightmares, and how will it change her family’s life?

Veena has portrayed the religious turbulence brilliantly and has rewardingly used this background in the plot. Life-like characters make up the story. Zeenat is superb as a young tormented soul in need of love. Ajay is the faultless boy-next-door. Pirzada, Altaf, Hari Prasad and Swami Agneyand are the textbook religious fanatics.

On the negative side, The Uncommon Memories of Zeenat Qureishi is quite lengthy for the story it tells. Veena has tried to do a lot of things in one book, which is not bad altogether but tends to confuse a reader – Hindu-Muslim divide, Partition, Babri Masjid demolition, past life regression, Islamic terrorism, Hindu fundamentalism, etc. all find a space in the book. Many of the sub-plots could have been left out as they do not add any profit to the narrative.

In conclusion, The Uncommon Memories of Zeenat Qureishi is one book which has made a candid attempt to explore the religious fabric of India without taking any sides, and for that, it should be appreciated.