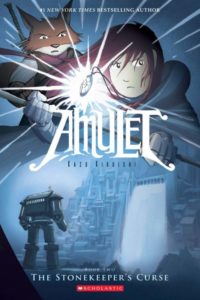 As in my earlier review, I told that a monster takes away the children’s mother and the story of book one about how the children saved their mother from the monster. This book is a continuation of the book one of the Amulet series. Now in “The Stonekeeper’s Curse”, there is an enemy who is hunting for one of the children Emily. He is doing so because he wants the amulet which Emily has. He wants the amulet because it has super powers in it. The enemy with whom Emily have to fight bravely is The Elf King. In book one, the monster who takes away the children’s mom is an Arachnopod and the mother of children is stung by it and the condition of mother appears to be very bad. This sting is so dangerous that the mother can even die. To cure her, the stung children have to get the fruit of one Gadoba tree. The whole story of “The Stonekeeper’s Curse” revolves around how they reached the Gadoba tree. There is one new character in a story named Leon, a bounty hunter. His role in the story is that of a bodyguard of Emily and other people with her.

The character which I liked most is the fox, Leon. I liked it because the adventure and action quotient in the story is good because of this character.

(This review is done by our young guest reviewer, Ayushman. He is 13 years old. His hobbies are playing football, reading graphic novels and cycling.)