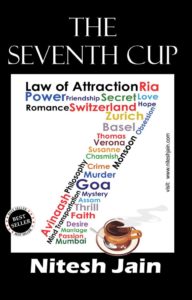 The Seventh Cup begins in the pastoral location of Switzerland. Avinash, the lead character, is pursuing his B. Tech degree. The story opens in a café where he is greeted by a Swiss girl Verona towards whom he takes a certain liking. She prefers to call him Mr. Khan as he belongs to the land of Shahrukh Khan. The location, the scenes, the dialogues and the way things take place all seem to be a fusion of Bollywood rom-com. The two have some sweet and sour exchanges. Much to his dismay, Verona is already taken but that doesn’t stop the enthusiastic Avinash from trying to coax her into giving their relationship a chance. She turns out to be a student of History at a Swiss University. While they laugh their heads off most of the time, they also have heated debates about their career prospects and subject choices. On the whole, their friendship is pleasant and Avinash is bowled over by her charm. His internal dilemma of letting her go versus wanting to know how serious she is about her present romantic interest translates into the theory of mind transportation that dominates much of the plot. It leads to the exact same café scene to be played out by the two characters knowingly and purposefully every time they meet.

The Seventh Cup has a moderate pace which keeps increasing with each passing chapter. Though quick, it is not difficult to keep up either. However, that doesn’t take away the fact that it is utterly confusing if not paid close attention to. Individual chapters are extremely long with several movements from Assam to Switzerland to Goa to Mumbai. But the story is never stagnant or repetitive. Though the highly Bollywoodised elements may seem very cliched at times, it is a mistake to think that the plot can be easily guessed. Just when you feel you can guess the next scene, something totally unimagined happens and the story takes a completely different turn. But there is just too much happening all the time. It is a fusion of a psychological thriller, suspense thriller and rom-com. It is the humour that holds the story together which is light and touchy. The great sense of humour allows for a hearty chuckle once in a while. The puns add to the humour but the novel is a dark comedy. Though lighthearted, the humour pricks and has double meanings.

The drama club and the staging of the play at Avinash’s college indicate that Verona had been an exchange student there and that they were familiar with each other much before they met at the Swiss café. This drama is metaphoric of the struggle in every man’s life and in the life of Avinash in particular. The tussle is between Science and Religion and the position that Man should consider as the right one between the two. The story keeps moving between the past and the present in no particular order. This play is nothing in comparison to the role-playing that Verona and Avinash do resembling the movie 50 First Dates. The missing child, the crime scenes and the bag exchanges add to the thrill. The lives of many individuals run parallel to one another as do many parallel stories of the past and the present. There are several characters who are of equal importance such as the mutual friends that Verona and Avinash have but the story mainly focuses on them and the moral idea of love. The creative book cover has the number seven inscribed on it with a collage of several words which more or less sum up the main facets of the story.

Detective Susanne’s investigations reveal that Avinash claims to be visiting Verona every Sunday at the café. But Verona has been missing for the past ten months. The dialogues of the play that Avinash had scripted reveal many dark aspects of his personality. It boggles the mind as suicide notes appear, several murder mysteries are solved one by one only to leave the stage scattered with corpses.

Is Avinash hallucinating about a Verona who doesn’t even exist in the first place but he’s only constructed her to be able to write better? Has he kidnapped, hidden and murdered Verona? Is there a killer hidden from everyone’s eye? The statements issued by a waitress of the café provide a new angle to the story which is a comment on giving mental health as much importance as physical health. Seven also has many numerological and philosophical implications. People suffering from acute emotional trauma are often demonised as mad. But it leaves several questions unanswered about the dark aspects of human nature. People may kill out of greed, ambition, envy and pride. But is it possible to kill out of love? With a mix of humour, horror and suspense, it is refreshing to read such remarkable writers from North Eastern India.