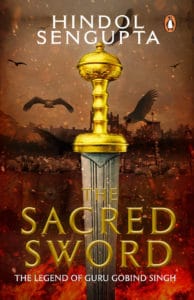 History is one of my favourite subjects and consequently, I love reading historical thrillers when it comes to fiction books. My craving for historical fictions is such that I gobble one or two such books every month. The Sacred Sword by Hindol Sengupta was sent to me by Penguin for review and without wasting any more words, here we go!

What is The Sacred Sword all about?

It is the story of the tenth and the last Guru of Sikhs, Guru Gobind Singh. The book opens with the young Gobind seeing the slaughtered head of his father, Guru Tegh Bahadur Singh, who was killed by Aurangzeb for not converting to Islam. The boy becomes a man overnight and subsequently becomes the Guru of his people. The book traces his story thereafter until the very end of his life.

What about the plot?

The plot is dense and gripping. Though there is a focussed central theme, many interesting side stories are included to bring in variety and range. The story takes us from the dusty lanes of Chandni Chowk in Delhi to the fertile green plains of Anandpur; from the Mahals of the Mughals in Agra to the blood soiled lands of the Deccan.

I felt inspired by the charisma and serenity of Guru Tegh Bahadur; poise even in the face of imminent death.

A glance into the history of Sikhs

Most of The Sacred Sword covers the life and era of Guru Gobind Singh and a lot of emphases has been given to the historical exactness of the events. The book, though definitely a fiction, is a great way to get a glimpse into the Sikh history of those times. The formation of the Khalsa is another major affair which the book covers. The reader also gets an insight into the culture and tradition of the Sikhs.

What about the writing style?

The tempo of The Sacred Sword is slow. The lack of thrill makes the book a dull read. Hindol Sengupta’s writing style is satisfactory with its share of positives and negatives. The better element is that it carries an essence of Punjab and a flavour of Sikh culture. The author relies on a decent use of Punjabi language which brings out the splendour of Punjabi culture. The prose made the read more like a history textbook than a novel. Personally, I would have liked the book better if the events were a little more dramatized.

How interesting are the characters?

I felt inspired by the charisma and serenity of Guru Tegh Bahadur; poise even in the face of imminent death. The personality of Guru Gobind Singh enthused me. Other characters did not invoke much interest. Aurangzeb, in his role as a religious fanatic, was convincingly diabolical.

Was the climax good?

The climax of The Sacred Sword was lacklustre. After such a good build-up, the book fizzles in the end.

Overall, the book was a good read. It wasn’t as enjoyable as I expected but still proved to be a reasonable read. It was beyond doubt worth every second of my time. However, a little more effort on the storyline would have made The Sacred Sword a phenomenal book.

Who would the book appeal to?

The Sacred Sword would appeal to people who love historical fictions. The book will be of particular interest to history enthusiasts.

Can’t wait to read it? Buy your copy of “The Sacred Sword” from the link below.