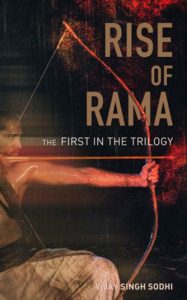 “You could fill an entire library with the different versions of the Ramayana that have been written over the course of man’s time on earth. This great epic is told by grandparents to grandchildren, saints to the masses and whispered on the winds of time so that with each generation there comes a renewed version.”

I am a believer. I worship Ram and I believe in him and I always enjoy reading Ramayana and its various retellings. Hence, it was such a happy opportunity when The Rise of Rama came to me for review.

The story as it goes

The Rise of Rama tells us the original story as it goes in the Ramayana. It is not a mythological fiction but true mythology. The book takes some creative liberty and reimagines certain conversations but that’s pretty much it. Apart from this small distinction, the story remains unaltered.

As Ramayana is an epic which most of us are more or less familiar with, I am not going to delve deeper into the storyline. Meanwhile, I do have a lot of thoughts that I want to share with my readers so continue reading if you want to know more about this book.

A book with a purpose

The Rise of Rama has been written with a purpose and it came to the author as a blessing. The book is written in a screenplay format which will help anyone who wants to turn the story into a visual format. It is a ready-made script for one and all with only one purpose – to tell the story of Ram to the world.

Minute changes have been made with respect to conversations, scene elaborations, rapport building between characters amongst others but overall the sanctity of the epic is preserved and so is its message.

The characters in this book are all brilliant. From the central characters of Shri Ram, Sita and Lakshman to other important characters like Dasaratha, Vishwamitra and Kaikeyi, all of them are well developed and interesting.

I like the way Vijay Singh Sodhi has taken great pains to cast the characters in a mould that will make them appealing to our younger generation. The conversation between the brothers Ram and Lakshman and the easy camaraderie that they share amongst them is an excellent example of this. I also enjoyed the sweet exchanges between Ram and Sita and their rock-solid relationship.

How is the author’s writing style?

Vijay has written the story in an easy breezy manner. He doesn’t rely on eloquence and sophistication but on making his characters relatable and his conversations interesting.

I particularly enjoyed the way he has tried to incorporate some long-forgotten snippets of our mythology into this saga. By doing so, he not just makes the reader familiar with these stories but also brings more perspective and dimension to the story of Ram. An example of such inclusion is the story of the mighty weapons Bala and Atibala.

Further, making use of cinematic terms like the Panoramic shot, Zoom In, Zoom Out, Interior, Exterior etc easily aid in converting the words to visuals in a reader’s mind.

What about the climax?

Since the book is the part 1 in The Rise of Rama series, it concludes at an important and crucial junction. The story in the book is told until the point when the trio of Ram, Sita, and Lakshman leave the kingdom of Ayodhya after Ram’s banishment by King Dasaratha on the demands of Queen Kaikeyi. This is a critical point as it marks the end of Ayodhya Kanda and the beginning of Aranya Kanda.

Is the book entertaining?

The Rise of Rama is a short read and easy read. The author has made good use of various writing techniques to keep the reader entertained throughout the course of the book. Overall, for anyone who wants to brush up their Ramayana in an abridged manner, this book is a perfect one to go to.

Pick it up if

This book will be a boon to anyone who wishes to bring the story of Ram into a visual format as they will not have to spend time and effort in doing what Vijay Singh Sodhi has already done spectacularly, in this book – written a brilliant screenplay.

Skip the book if mythology, in general, does not interest you. You may also choose to refrain from the book if reading a story in a script format is not your thing.

Can’t wait to read it? Buy your copy of The Rise of Rama from the link below.