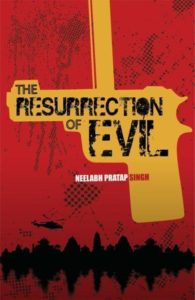 I have always believed our Hindu mythologies – Ramayana, Mahabharata, Shiva Purana and Vishnu Purana – to be more of history rather than mythology.

I am a firm believer in the theory that our Gods were once humans who became Gods because of their karma.

But the degree of facts in our mythologies is a matter of individual opinion and interpretation.

Many books have been written rationalising these myths using science and reason, notably by Anand Neelakantan, Amish Tripathi, Ashwin Sanghi, Anuja Chandramouli and Devdutt Pattanaik – some fiction and some non-fiction.

“The Resurrection of Evil” by Neelabh Pratap Singh is a fictional book in this genre which uses mythological plots and characters to narrate a modern-day thriller.

“So far we have been taught that the Aryans from the West migrated to India and invaded the indigenous Dravidians, pushed them to South India. But it is a myth. The migration actually happened otherwise.”

The Archaeological Survey of India discovers some ancient artefacts from Purola in Uttarakhand which is transferred to the National Museum in New Delhi.

But one of the artefacts, a metal pot, is stolen from the museum in a swift heist. Maverick ACP Aryan of Mumbai crime branch is brought in to locate the thief and retrieve the pot.

The case takes a complicated turn when the thief is murdered, the pot is still missing and the cops find some clues written in Irish about Irish mythology.

To crack the case, Aryan must unravel the link between Indian and Irish mythologies with the help of Dr Vats of ASI.

Soon, he finds that he is not the only one in search of the pot; the mythical and dangerous Asuras, Danavas and Nagas all want to get hold of it for themselves, each for a different reason.

Each clue that Aryan finds provoke more questions than answers and take him all over India – from the banks of Ganges in Haridwar to the Arabian Sea in Kerala.

An interesting thing about “The Resurrection of Evil” is the way it aims to establish a link between Indian, Irish and Mayan mythologies.

The diverse subplots which seem puzzling in the beginning, sync well as the story evolves and their conclusion is near-perfect.

The various questions that arise at the beginning of the book, get flawlessly resolved in the last few pages.

I have nothing much to complain about the prose, but few of the readers might find a want of finesse; the plot more than covers for this one flaw.

With a little more effort into his writing style, Neelabh can surely become one of the leading authors in this genre. The climax is one of the best I’ve come across in recent times.

Is there a link between Indian, Irish and Mayan mythologies? Will Aryan be able to retrieve the pot? Why are the Asuras, Danavas and Nagas so desperately seeking the pot?

Read “The Resurrection of Evil” to find out.