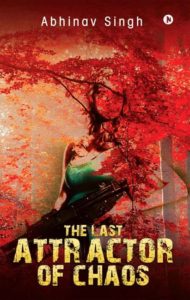 The story of The Last Attractor of Chaos starts with action-packed sequences that pull the readers right into the plot. Gradually, the protagonist of the story is introduced who remains contented in his little family-life unaware of the tragedy to befall him and his family. It is just one decision that changes everyone’s fate.

While reading the book, I kept wondering what would have happened if that decision was not taken and things went according to plan! But again, going against the plan was the plan all along!

What follows is a cat and mouse chase between the security personnel and the perceived culprit of chaos – a weaponless, pregnant lady. But there is more than what meets the eye as the story moves back and forth, joining the dots of the different characters’ lives and revealing the connections and secrets they have been keeping under the curtains.

The protagonist is shocked when he realizes the true nature of his wife’s past to the point that he questions whether he should hold on to the ones he loves. What was this secret? What made him shocked?

I must give credit to Abhinav Singh for not letting the attention of the readers drop as he went on reciting the interwoven plot.

There were certain things that I found unique in The Last Attractor of Chaos. But before I go ahead with my points, I must declare that it is not a popular opinion but the comparison is based on what I have read so far in my life.

So, going ahead with my comparison, firstly, the narrator is killed in the initial pages of the book itself. Now, this is not usual for me as most of the books I have read show the narrator as a survivor, who lives to tell the story! So, that was something interesting to me.

Here, however, the narrator is dead, but he still fights for his family and restrains himself from being sucked into the transition process.

The second thing that makes it different from the rest of the books in this genre is the way Abhinav Singh dealt with the conspiracy theories. Here, it is not the external agents that mean harm to the entire mass but the country’s own people who have the responsibility of taking care of the population, who are using the power, covertly, for their own gains. The concept of manipulations and betrayals and backstabbing within the organisation is evident throughout the novel.

Another thing that differentiated it from other books was the author’s deliberation on some of the questions that we mortals have and the nature of the answers/theories proposed by the author. To an extent, I was convinced by the explanation the book provided. It was interesting to see otherworldly questions having scientific answers. This must be an influence of the author’s educational background in the field of Physics.

However, it should be added that apart from certain concepts and theories, The Last Attractor of Chaos was not difficult to understand. The author’s use of lucid language made it even easier.

The characterization was fine but the ending was abrupt. There were certain questions that went unanswered like what happened to the protagonist and his family? Did they survive the accident? What will be the fate of the weapon of mass destruction? Will previous enemies join hands? Will the narrator find peace at last? Also, the concept of “the last attractor of chaos” was unclear.

The absence of a closure, maybe, is an indication of a sequel to the book which will take the plot further. I am looking forward to it as I want to learn the second half of the love story of the protagonist and his wife.

Overall, The Last Attractor of Chaos is basically a spy thriller with a metaphysical twist. It is a good read that any crime thriller reader may enjoy.

Can’t wait to read it? Buy your copy of The Last Attractor of Chaos using the link below.