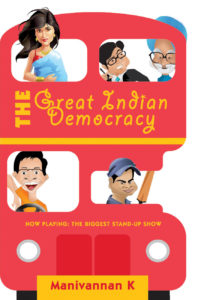 India’s is the largest democracy in the world and we, as Indians, are indeed honoured by the sheer fact of it. But this largest democracy has had its own share of unspeakable moments too. From multi-crore scams to sex scandals, this democracy has been scarred by all things disgraceful. So, it is nothing short of brilliance when we still find our country; running under the evil clutches of today’s asinine political clan; successfully thriving and contending its own place in the global arena.

So, what makes our democracy so different? What renders it its indigenous flavour? Author Manivannan K is here to give a glimpse of what goes into the making of the Great Indian Democracy. A twenty-something Vikram moves to Delhi to live up his dream of becoming a stand-up comedian. Little does he know, that his passion will not be the only thing required to make it work. So, as soon the money runs out, the passion takes a back seat and ultimately the worldly needs of the standard “Roti, Kapda and Makaan” kicks in.

Unable to sustain himself in the ever-bustling city, he quickly grabs up a job at the Great Indian Democracy, the political magazine run by a nutty wit called Baldy. Fully furnished with his zero knowledge of the Indian politics and assisted by a beautiful and intelligent intern Advaita, Vikram quickly learns his folly. But will he be able to make any good out of it? Will he rise to the expectations of his colleagues and friends? Will he ever be able to become the stand-up comedian he so wanted to be?

Moving onto the more intricate details of the book, I would first like to emphasise the point that the book has indeed a very catchy title and cover. One look at it and you will be swept off your feet to add it to your shopping cart. However, whether the end product is as attractive as the aforementioned is the real question. Let us also find out, as per the narration of the blurb, how “disarmingly funny and thought-provoking” the book actually turned out to be.

The plot to start with is a simple plot straight out of a concoction of a series of books already read and done with. Though simple, it does not kick a beat and makes the book feel more like a plotless one. The characters are something to look forward to, with the most impressive ones being Ramesh Anna, Subroto Bose and Sus Cheta, the ones which make the book score in excitement quotient area. The climax is non-existent but with a subtle yet definite hint of a happy ending ever after. I enjoyed the writing style of the author in the sense that it makes the reading smooth and effortless, but when it comes to the volume of humour promised, the book turns out to be a disappointment.

The title which promises a comical satire on Indian democracy is buckled down by the lack of innovativeness in choosing of political themes and incidents. The wittiness is either stale or disproportionately tilted against the Bongs and the Mallus. In the end, the book does not deliver much on the Indian polity and the title proves to be just another over the edge marketing gimmick. Overall, an okay book to be preferred as a light read and I would give it a three out of five stars.