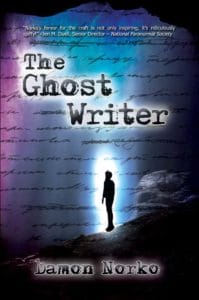 One look at “The Ghost Writer” and it is quite easy to dismiss the unappealing cover but when you bother to read the blurb, it sounds rather intriguing and appealing. And that was exactly why I decided to pick this book out of the many options available. This sounded cool and exciting. The story is based on a theme which I have become really fond of recently – Afterlife.

Damon Norko’s “The Ghost Writer” is about the journey of a man Arnold, who after having lived 64 years of his ordinary and mundane life, crosses over to the other side. In this other side, he has a really important presence. He is an acclaimed writer and a very good one too. His is the first voice from the other side and anything he pens downs gets sold like hot cakes. But is that all one requires enjoying an afterlife? Until now he was living a quite content afterlife but a chance encounter with a young girl Clarisse who had also crossed over to the other side but unlike Arnold was still full of energy and vigour changed his perceptions about many things.

He soon became friends with her and enjoyed spending his days with her. But then something happened and Clarisse goes missing. In trying to look for her and find her whereabouts, he discovers the ugly truth about his employers and about the corporation which runs the other side. Knowing what he knows, he is devastated and broken. Still looking, he comes across another group who are different from the other souls he has seen so far. Together they set out to change the other world. So will they ever be successful at what they want to achieve? Will the corporation bring them down too? Will Arnold find Clarisse? These are answers you can only find once you read the book.

I simply could not make sense of the very scattered story and the poor plot. There was no coherence in the plot, as a whole. The story definitely gets off to a good start but by the end, it is merely crawling. The end is very abrupt, absurd and hasty. It does not make any sense at all. The characters are an okay bunch. Arnold is okay, Clarisse is better and Manny was simply a waste. The others were really non-existent because they only sprouted up towards the end and given the end was really hasty, they did not have a fair share of time and space for them.

All in all, “The Ghost Writer” is an okay read but I will suggest to give it a miss if possible. There are much better books on the afterlife if you really want to read one. I will end this review by rating this book two and a half out of five stars.