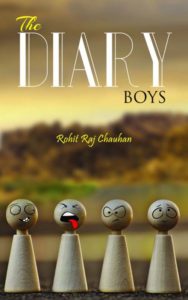 Coming of age novels are always an interesting read. They are like time machines, taking us back into time and making us relive all the beautiful memories of the past. The Dairy Boys is also one such book which is a story of four friends Ayush, Rahul, Amit and Vivek and their coming of age.

“The Diary Boys” tells us the story of these four friends by the means of one diary in which each one of them writes alternatively. After the end of each month, the diary changes hands and then goes to the next friend in which he pours out his heart for the entire month before giving it to the next guy at the end of the month. The boys decide on this because they wanted a medium to express themselves freely and also because it was agreeably a great way to know about each other’s lives.

The story starts off well and has some interesting characters which are fun to read about but what turned me off as a reader was the writing style of the book. Almost the entire book is written in a conversational style. There are only (well, mostly) dialogues and nothing else. While it does tell the complete story but the reader gets a feeling of something being missing.

Another turn-down while reading the book is the poor editing. There are a lot of grammatical and spelling errors. The sheer number of the editing mistakes is enough to put one off the book. “The Diary Boys” has an interesting plot and concept but the execution leaves much to be desired.

The characters are an interesting lot and a great fun to read about. The portrayal of a teenage boy on the verge of manhood is so accurate and realistic that a visit to your own past is almost obligatory. I liked the way the book is written in the voices of all its four main characters. The book portrays one of the most crucial years in an Indian teenager’s life – during and after 12th board exams and that is done exceptionally well.

The struggles of an Indian student in those years, highlighting the recently piqued interest in the opposite sex is a situation which is described quite convincingly. The climax is simple and very predictable.

Rohit Raj Chauhan is a debut author and thus his writing is still naïve and amateurish but writing is a long journey and this is not the end but the way. I am sure given more time and exposure, the author will definitely become further mature in his writing. I wish him all the best, and would definitely wait for his next book for he has good talent only waiting to be honed.