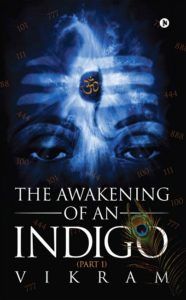 I am an ardent reader of mythological fictions but I’ve read very few books that bring together mythology and contemporary fiction. Two such books that I recall reading are The Resurrection of Evil and Semmanthaka, however, the latest one to join this bandwagon is The Awakening of an Indigo by Vikram.

Read on to know my thoughts on this book and to know why I think this book might appeal to people who are in love with mythological fictions.

What is the storyline?

Vikram is special. He has some unique powers and unusual occult and psychic abilities. He is a successful lawyer in a prestigious law firm in Mumbai and is always a winner at whatever he does. However, he is often troubled by his special powers as he sees and experiences things which others can’t.

Because of his ability to foresee future, he avoids stepping out as it often gets messy. His skills at reading people and unveiling their fake masks often deter him from creating lasting friendships.

He can’t really place it but Vikram has this hunch that he is a part of something big. He is frequently visited by supernatural entities clad in masks; sometimes black and sometimes white. Some are there to protect him and warn him while others have something much sinister in their mind.

In order to understand his abilities better, to know about his previous lives and to find his true purpose in this life, he gets in touch with Dr. Myra who is a specialist in past life regression. As Vikram communicates more and more with her, Myra helps him in his spiritual development and in understanding and healing his chakras. In the process, Vikram also learns about his connection to mythological figures like the Sun god, Karna, Lord Shiva and Lord Ganesha.

Vikram soon starts to get the hang of things. He discovers a lot about his previous births and also gets a hint of his current life. He learns about his purpose in life but he also discovers that his journey ahead is marked with unsought dangers and evil energies. His life is at risk and, there are powers working to prevent him from achieving the things that he is capable of.

The characters in The Awakening of an Indigo are an intriguing bunch. Both Dr. Myra and Vikram come as interesting characters. Vikram being an Indigo child (a child born with special psychic and occult abilities) is especially fascinating to read about.

Though the author does not delve deep into Vikram’s past, he is still able to make him a charismatic character. Vikram is honest, powerful, captivating, with just the right dash of darkness in him. In addition to all his good qualities, it is this darkness and his human weaknesses that make him a realistic and relatable character. Another point worth a mention is that the protagonist, Vikram shares his name with the author of this book.

Dr. Myra is also an important character, though, in this book nothing much is revealed about her. I truly wish to know her better and would have loved it if the author had also given us her backstory.

Nevertheless, there is another book to look forward to and I hope that the author will do justice to her character and reveal her story. There is also some scope for a romantic liaison between Vikram and her, which the readers get a hint of towards the end, but, I like the way it is kept shrouded in mystery in this part. Thus, giving us another reason to look forward to the Part 2.

Barring these two characters, there are others who also manage to catch the readers’ fancy. I would love to know more about Rudra Pratap Singh (Vikram’s friend) and also about Vikram’s boss. I’ve got this hunch that there is more to their role in Vikram’s story than what is revealed in this book. For now, I can only be patient until Part 2 is released.

What about the writing style?

The author’s writing is good. There are many places throughout The Awakening of an Indigo where the author is able to showcase his skills as a writer. The best thing, however, is his ability to create such an enticing storyline in just over 150 pages.

Often authors are lost in eloquence and exquisiteness of their words but not Vikram. He does not waste words, he is brief and exact and it is this succinctness in his writing that lends this book its breezy character.

His language is flowy and his words are simple. This is a book which can be enjoyed by the elite and the masses alike for it has something to offer to both these categories of readers.

I also liked the way the author weaves a fascinating tale around Hindu mythology, connecting it with the story of Vikram in more than one ways.

He also sheds a good amount of light on Hindu concepts of Chakras, the importance of spirituality, the concept of Indigo children and some long-forgotten tales from our mythology.

In this sense, the book is quite informative and knowledge-imparting to its readers. That a lot of work and research has gone into its writing is visible from the list of resources mentioned at the end of the book.

Is the climax good enough?

The climax doesn’t satisfy you in the way a regular climax should, but, that can be forgiven because the book is a part of a series. It does leave you on an interesting note though, with the promise of some exciting action and adventure in the coming part.

The Awakening of an Indigo is an interesting one and does promise a good amount of entertainment. It starts on a really exciting note and with the help of excellent character building and a promising plot, gets the reader hooked right from the start.

However, it slows towards the middle section before picking up the pace again in the end. To me, the end felt a bit rushed. I believe it could have been drawn out less abruptly, but, I liked the way the part 1 of The Awakening of an Indigo ends on a cliffhanger and with a lot of possibilities and unanswered questions.

To sum it up, it is safe to say that the book scores well in the entertainment quotient.

What could have been better?

In my humble opinion, I think the author could have done away with the detailed sessions between Dr. Myra and Vikram. These sessions though interesting initially, become a tad tiresome and monotonous as the pages start to progress but not the story.

Introducing more of actual action as opposed to just sessions would have done wonders to break the monotony that crept in towards the middle of this book.

Pick it up if?

Pick up The Awakening of an Indigo if you enjoy mythology, mythological fictions, mythological thrillers and are interested in spirituality and concepts like past life regression.

The only reason I can give you to skip The Awakening of an Indigo is that if you don’t find yourself inclined towards Hindu mythology and/or spirituality.

Can’t wait to read it? Buy your copy of The Awakening of an Indigo using the link below.