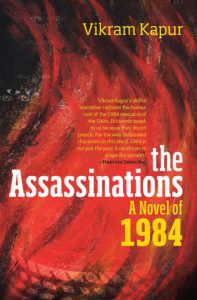 Major world events don’t happen overnight. In fact, any major event does not happen overnight. They do not arise out of silly tiffs between indecipherable opponents. They are the gruesome outcome of the building up of tensions over a very long period of time. Near the heart of the largest fully functional democracy of the world is a turmoil on the rise. It is much feared and deeply debated but looks frighteningly close. If security measures fail and the manslaughter breaks out then it will have far-reaching and unimaginable consequences that will go down in the pages of history to be read with unease.

The Assassinations: A Novel of 1984 opens in Savitri’s house situated in Defence Colony in the Delhi of 1984. The common man is the common man everywhere. He wants to earn his daily bread, live in peace and be with his near and dear ones. Prem, like any other young and successful professional in any other part of the world with a stable income and a decent social status wants to get married. He is deeply in love with his college girlfriend Deepa. Deepa who is about to graduate from college, has rejected all the other matches that her parents have selected for her and is adamant on settling down with Prem. It is never easy for any parent to give away their daughter, more so to an unfamiliar boy of a different community. Deepa is Hindu and Prem is Sikh.

Face to face interactions between the families are a breeze as Deepa’s father is a migrant from Rawalpindi and Prem’s father is a migrant from Multan. These nouveau rich understand the pains of partition and the commitment to being a Punjabi. They have lived through the partition and have grown too old to deviate from their responsibilities. But for boys of the younger generation like Prem any chaos is difficult to digest in their otherwise rosy world.

The Golden Temple is the most revered shrine of the Sikhs and an attack on it will ignite the unified revulsion, wrath and rebellion of Sikhs from across the globe. While the All India Radio declares Operation Bluestar a success, the target community has very different views and feelings about it. Prem was never religious nor took any interest in politics but now he finds himself in a pool of incessant queries about them both. Though the narrative is full of twists and turns, Vikram Kapur avoids any sudden revelations and multiple climaxes. There are several instances when the story reaches a high point that is not forewarned but Kapur is cautious enough to not make things drastic. The horrors and fears that loom at large since the beginning of the story are voiced level headedly as events unfold. However, at the core, The Assassinations: A Novel of 1984 is more a romantic tragedy in the backdrop of a political thriller. In light of the dark events that slowly disclose to both the reader and the other characters, the protagonist Prem becomes a changed man. He has now begun to grow his beard long, don a turban and visit the gurudwara. But Prem’s ignorance keeps him from knowing that he is being tapped and shadowed to be recruited as a potential militant by a bunch of psychopaths working under the guise of self-proclaimed religiosity.

The apt choice of an omniscient narrator helps to give a view of the developments from the perspective of all the characters. The narrative is linear and its pace is delightful. Events are unveiled with a maturity that is highly commendable. Vikram Kapur eliminates anything drab and unworthy to create a storyline with the right balance of passion, tension and friction. He is uninterested in emotionally intimidating the reader with melodramatic dialogues. Neither does he get caught up in facts and figures about the number of massacres, damage to public and private property or other financial losses. Nothing is over dramatized though it is a fictional tale based on true historical happenings making it highly realistic. The actual events may not have included this particular set of Kohlis but similar stories are strewn all across partition non-fiction, narratives of communal riots and factional upheavals. It is a revealing comment on the sorrowful dilemmas of common people during communal tensions where they forgetfully, knowingly or out of compulsion have to stand with the sense of community belonging and inheritance, no matter if their personal opinions about the state of affairs differ from the largely held perspective.

The Assassinations: A Novel of 1984 is centred on the characters and it is through them that the distinct facets of the turmoil are depicted. Prem’s Hyderabadi friend Irfan who is a failed lyricist with an MBA degree is an indispensable character of the story. He is Prem’s closest friend and ally who had played the wingman by writing short romantic poems for Deepa on his behalf. To see Irfan’s Bollywood misfortunes and a dejected face aches him. Sooner than later, chaos runs rampage as the Prime Minister Mrs. Gandhi is shot. What follows is an unexpected encounter between Prem and a few constables with hockey sticks on his way back home from Irfan’s house. A boy from the muhallah informs Irfan about his carwallah friend’s tragedy. As he rushes to the scene along with a nursing orderly Raj Kumar, Irfan is in for an ordeal as local netas approach him with kerosene, lathis and hockey sticks mistaking him for a Sikh. The pace of the narrative catches on as, in a desperate moment to prove his identity and save his life, Irfan has to resort to let the netas know that he is circumcised. With curfew imposed, the army deployed in Delhi and jawans conducting flag marches, it is a long wait before things find any meaningful resolution.

Another short but significant episode takes place when the much concerned Pritam informs Deepa’s father about the undercover agents he has in gurudwaras. A photograph of Prem sitting with a recruiter is a shocking revelation to a father-in-law who had harboured, for long, apprehension about this match in his heart. It is heart breaking as Deepa’s marriage is called off for absolutely no fault of her own. Deepa, who had felt Prem act emotionally unavailable for a while, had no inkling about such developments. She is distraught beyond repair. Meanwhile Prem must prove himself worthy of militancy. In a muffled conversation at Lodhi Gardens, he is handed the task of delivering a wrapped box to a bus. Despite a few graphic episodes the story is not cluttered with unnecessary information. The pace of the narrative is just right to allow for the ideas to sink in even to a reader who is unfamiliar with the Anti-Sikh riots of 1984. The contents of the wrapped box will unbox several mysteries. But will Prem choose to deliver it and prove himself a worthy militant?

Prem’s sister Seema represents the new generation of Sikhs who had migrated to the West during the late 80s in large numbers in order to flee the massacres. Seema returns as a divorcee and single mother to the India of the millennium with its sky scrapers, baristas and women slowly constituting the work force. This new India is very different from the one she had left behind as a refugee to America. Better connectivity, westernised eating outlets, digitization and acres of multi-national corporations reflect a budding India that has swallowed well the idea of globalisation. She is surprised but untouched by any of it. Her visit is a trip down the memory lane of all that has been left unspoken but not forgotten. Seema becomes the image of the mayhem’s outcome and the justification of the open endedness of the story. For many, certain trials of the past remain to infiltrate into their future. The ghosts of the partition still continue to haunt Punjab on both sides of the border.

With an eye for detail, a clarity of thought and maintaining just the right amount of closeness and distance from the events which allows for a developed understanding, Associate Professor Vikram Kapur is a force to reckon with.

Can’t wait to read The Assassinations: A Novel of 1984? Buy your copy at the link below