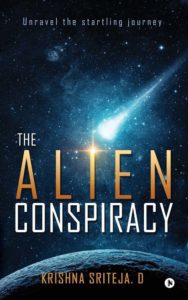 It’s not every day that you come across an Indian science fiction novel and thus finally when you find one, it is hard to resist oneself from the lures of it. The first thing which draws you to this book is its cover. The beautiful graphics on the cover combined with an intriguing blurb arouses the reader in you and immediately urges you to indulge in this novel.

Krishna Sriteja’s “The Alien Conspiracy” is a heady concoction of science fiction, thriller and mystery and to top it all, there is just the right dose of romance and poetry. But before I tell you what all I liked and disliked in this book, let me tell you a little bit about the story.

Saaksh is a theoretical physicist at the Karunya University in Coimbatore, India. He loves his job and is really passionate about it. Living a content and blissful life with his wife Saanchika, Saaksh is one day left dumbfounded when a stranger calling herself Abha Eavans lands at his doorstep and says something very strange and unbelievable. “Your planet Earth is marching towards destruction” is what Abha tells Saaksh, while also informing him that she has come from another planet called Exoearth and is his future wife from an alternate timeline in a parallel universe.

These words leave anyone stunned and that is precisely what Saaksh feels before Abha meticulously convinces him through facts, proofs and rationale. All the convincing done, their next job is to save the planet Earth from the doom it is marching towards. But how will they accomplish it? Will they face obstacles from within and outside Earth? Will the two of them be sufficient for the task at hand or will they need help from Exoearth? To know this and much more about this tantalising tale of love and courage, do read this novel today!

The best thing I liked about “The Alien Conspiracy” was its characters. Both Saaksh and Abha were the epitome of courage and perseverance and somewhere in the 178 pages, they managed to establish a deep connect with the reader. Even Dr. Zahen was quite convincing in his character as a diabolical and evil person. The plot of the book is decent, though I believe it could have been better. I personally liked the attention to detail given to the various scientific facts, phenomenon and theories. The illustrations given in a few chapters to help the readers in understanding them were also a blessing.

Having said that, I also believe that there were a lot of them (scientific jargons, theories etc) and that made the read a little boring for a normal reader like me. The pace of the book is maintained well throughout and that is a good thing indeed. The frequent change of place of action from India to Egypt to America to the Universe also helps in keeping the pace maintained and in retaining the reader’s interest. The little dose of romance sprinkled tactfully in between the chapters was also an added bonus and so were the beautiful poems which added a new dimension to the author’s writing style.

All in all, “The Alien Conspiracy” is a decent read and I rate it three and a half out of five stars while recommending it to all my readers (specifically to lovers of science fiction). Krishna is a new author and some good encouragement from the Indian readers along with constructive criticism will (I am sure!) do wonders to his writing.