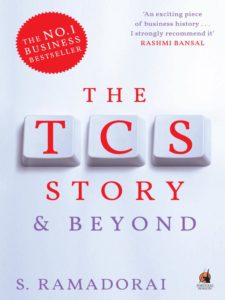 Disclaimer – The view of the reviewer is his personal opinion about the book The TCS Story and beyond and in manner reflects his connections with TCS, hence maintaining an unbiased review of the book.

S. Ramadorai’s “The TCS Story and Beyond” can be viewed as a study of what it takes to build a great company out of almost nothing. The teamwork and the leadership grit that propelled Tata Consultancy Services (TCS) to be the pioneers in its own field, this is the story of the company that revolutionised the Indian IT industry into one gigantic money churning machine it is today.

As  Mr Ramadorai himself puts that this book is not an attempt at glory, but to inspire the next generation of professionals who must think of problems very differently. The TCS story is supposed to be an inspiration.

The book talks about the early days of TCS how and what catered the need for laying the foundation of an IT based company within the TATA group, with a meagre investment of Rs 50 lakhs ($110,000). The idea was simple to be able to process the data of its various subsidiary companies like Tata Iron and Steel (TISCO, now Tata Steel), Tata Engineering and Locomotives Works (Telco, now Tata Motors) and Tata Electric being the major ones among them. The book talks about how the early days and struggles of top management of TCS were and how they fought out with. It goes into detail about trying to explain in how many possible Indian laws were screwed up for any IT start up. The best part of the book though is not its detail or not why TCS is the biggest IT Company in India, but about inspirational it can be if you want to be a part of something big.

“The TCS Story and Beyond” establishes the fact that the Tata’s have committed themselves to the task of nation building be it any sector or industry in India. The Tata’s are truly the pioneers of IT revolution in India. Also the kind of difficulties TCS faced in the period of ‘license raj’ was well narrated. It makes us to feel how cumbersome the policies has been laid that importing a mainframe computer to India would fetch nearly 2 years from the order, despite paying twice the cost of the computer as tax, custom duties, etc., Hardship faced by TCS on several occasions due to govt policies and the way it has limited TCS’s and India’s ability to march ahead in tandem to other developed/developing countries is also expressed elegantly. The mentioning of patriotism shown by TATAs is sprinkled almost everywhere as the reverence with his boss Kohli was shown. Some of the best practices inculcated by TCS was boasted. This books made me feel that when some people over here (India) talks about emigrate to another country seeing the kind of difficulties they’re facing from the govt. policies, bureaucracies, hurdles, etc.,

The book had a few downsides also that at certain points it seems like a mandate for TCS, more like a pep talk, Mr Ramadorai mentioned the achievements TCS was getting but failed to clarify as to what the market situation was at that moment.

In all final word if you are an entrepreneur and are looking forward to some ideals to base your commitments on then this one is a must read, or else it’s a good book written by a very smart person.