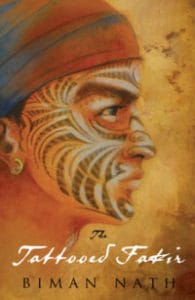 Imagine this – You are at an airport. To kill some time, you enter the bookstore. You come across a book with a catchy title and an equally catchy cover design. You look at the blurb and that too seems exciting. What do you do? Simple, you buy the book. That’s what I did when I came across Biman Nath’s “The Tattooed Fakir”. The title & the cover totally enticed me into buying and reading this book. The average rating for this book in Good Reads was a mere 2.5. But I brushed it aside and decided to give it a try. Being a lover of history, I am happy to have read this book.

The plot of this book is set in the late 18th century when India was under the “East India Company”. The story is about the revenge of a peasant, Asif, whose wife, Roshanara, is kidnapped by a British Sahib. In his quest for revenge, Asif joins a band of Rebel Fakirs who are wreaking havoc on the Company soldiers. Over a period of time, he learns to ride a horse, use a sword and masters the art of rocketry from Tipu Sultan’s soldiers. His first raid on the Sahib’s bungalow is a failed attempt but he manages to rescue a young boy, Roshan, who he thinks is his son. Asif later realises Roshan is, in fact, the son of the Sahib and Roshanara. The boy is often taunted as a white jinn because of his colour. To silence his adversaries, he gets his face tattooed and becomes “The Tattooed Fakir.” The rest of the story is about the growth of Roshan as a soldier, the internal strife among the fakirs, their war against the company sepoys and how they lose this war.

The book brings out many important aspects of 18th century India like the Zamindari System, the Anglo-French war and the music & culture of that period. The author has done some good research and has written about many real life characters of that era like Majnu Shah, Musa Shah & Yusuf Khan. The geography of eastern Bengal is explained in detail. The author has creatively used many historical incidents of that era in the plot. It makes the story lively and compelling.

The major negatives in the book are the title and the climax. The plot does not do justice to this catchy title. When you see this title, your expectations about the plot are very high but you end up being disappointed. The character of Roshan – The Tattooed Fakir – is not effectively used. I felt that he has been given a minor role in the plot. The dialogues between the Sahib’s manager and his sister are stretched a bit and it gets boring after a time.

Finally, if you ask me whether I recommend the book or not, frankly I’m confused. This is not a book which everyone will like. This is a good read for people who love history. But I would say that in spite of all the beautiful narrations about the Geography, History, Society & Culture of 18th Century India, the book fails in its basic purpose – justifying its title.

Read the book to know:

“Why was Roshanara kidnapped?”

“Why was the French manager & his sister so secretive about their past?”

“How did Roshan become ‘The Tattooed Fakir’?”

“Did Asif extract revenge from the Sahib?”