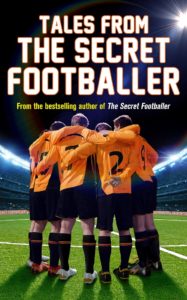 Football is one of the most watched sports in the world, and has millions of fans in multiple countries. And the English Premier League is one of the most popular leagues in the world, with fans around the globe waking up at ungodly hours to watch their favourite clubs play every weekend. The popularity is unquestioned, especially considering the amount of money that is poured in by TV companies to win the rights to air the league in various countries. In fact, the latest TV deal the EPL made was a record £5.14bn covering a period of 3 years.

That kind of money usually means there is lot that goes on inside than just players turning up to play the game. With the amount of wages paid to the players, there are always distractions and things that happen that you would not normally associate with the sporting world. There are many tales that insiders in the game are privy to that the fans have no clue about. And that’s where The Secret Footballer comes into the picture. In his tell-all book, Tales from the Secret Footballer, the anonymous column writer only known as The Secret Footballer (TSF) reveals a lot more that happens on the inside than you thought you knew.

While being careful not to reveal any names that would cause problems to his anonymity and that of his sources, TSF gives inside information about how things work in a football club. For example, he talks about how players are sometimes mysteriously injured for long periods of time. According to the TSF, such vague injuries as back problems that seem to go on forever usually mean that the player was probably found abusing drugs like cocaine, and in a private deal with the FA, the club suspend him for a long period of time rather than out him publicly and ruin his career.

There are many such revelations that begin to make a lot of sense to the fans who feel left out of what is going on at their beloved club. In another anecdote, TSF reveals how a club tries to shortlist a manager and how the process varies for a smaller club and to that of a big club. There are also anecdotes about some players that are hilarious, especially the one where three player buy a yacht and the hilarity that ensued when they took it out to the sea one day.

Tales from the Secret Footballer is a definite page turner, and if you are even remotely interested in the game of football, this is a book that you must buy for you will enjoy it immensely.