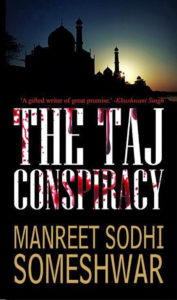 While doing my engineering, I had come across P.K.Oak’s conspiracy theory that Taj Mahal was, in fact, a Shiva temple called ‘Tejo Mahalay’. I had spent days researching the topic, reading historical literature, articles and conspiracies alike. I had drawn my own conclusions and even at the slightest opportunity would speak hours on the topic. So, you can imagine how I felt when The Taj Conspiracy was released. I pre-ordered the book and finished reading it in a day once it was released.

The plot of The Taj Conspiracy revolves around the murder of a Taj Mahal Supervisor and how the protagonist, Mehrunnisa, tries to solve it after she is falsely implicated for it. In her journey, she uncovers a conspiracy to destroy and defame the Taj Mahal.  As the story progresses, Mehrunnisa is tangled deeper and deeper into the conspiracy and tries fruitlessly to stop it. She comes across characters with their own agendas and designs. She doesn’t know who she can trust and who she can’t.

Manreet does a brilliant job of character portrayal. The main character, Mehrunnisa, is a Persian with Indian roots. She is an independent, brilliant and down-to-earth Mughal scholar researching in India. The supporting characters too are built-up brilliantly and used with equal brilliance in the story. The one thing that confused me was the narration involving the PoK terrorists. I had imagined them to play a pivotal role in the book but their roles ended abruptly.

The one thing I really cherish in any book is the climax. Either because of pressure or lack of time or sheer lack of imagination many books fail in their climax. This book was no exception. I really hated the climax. It was unbelievable and unimaginable. It is always disappointing to see such wonderful plots with such climaxes.

Overall, I would conclude that The Taj Conspiracy was a good read. If I could ignore the climax, I would rate it a 4.5. Buy or borrow a copy and get to know the symbol of love, The Tajmahal, better and get the answer to:

“Who wants to destroy the Taj and why?”

“Why was a Persian engraving in the Taj recently altered and by whom?”