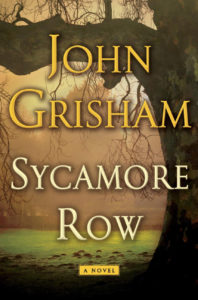 People say that John Grisham can write only legal thrillers and so cannot be considered a legend. If you are a Grisham fan and have read even a few of his books, you’ll realise that this statement is a baloney. Sticking to a single genre, he can create so much of variety that it is enviable; a rundown lawyer’s fight for a homeless man in ‘The Street Lawyer’ or the dark face of law firms in ‘The Firm’ or scams by judges in ‘The Brethren’ or class action suits in ‘The Rainmaker’ or jury manipulation in ‘The Runaway Jury’ etc. are all very different and so is Sycamore Row, Grisham’s latest masterpiece.

One Sunday, Seth Hubbard, a lumber trader and millionaire, commits suicide. The next day, Jake Brigance, a Clanton lawyer, receives the handwritten will & testament of Seth and a letter which asks him to fight to ensure that the will is enforced. The trouble is that Seth’s hand-written will gives away 90% of his entire estate to his black maid while ignoring his own children, Herschel and Ramona. In the white-dominated South, where race is still a prevalent factor, Jake has to fight tooth & nail, and impress upon the jury that Seth was in the right state of mind when he wrote the will.

“Why did Seth Hubbard leave his entire money to his black maid?” “Will Jake be able to influence a white-dominated jury to win the case?”

Though the plot is simple and straight-forward, the mystery which is revealed in the climax is worth every penny. The plot is beautifully built up and Grisham takes care of even the minutest of details, be it a bar or a coffee shop or a courtroom. He has a knack for writing about detailed legal procedures without being boring; the summaries, depositions, summons, jury selection, and the actual jury trial are intricately explained in each of his books but I can never have enough of them.

This book is marketed as the sequel to ‘A Time to Kill’, Grisham’s debut work, though this book can be read standalone too. The only continuation is of the characters. Jake Brigance who defended Carl Lee Haley in ‘A Time to Kill’ is the lead lawyer in this book. Jake’s alcoholic landlord Lucien Wilbanks, his friend, the divorce lawyer Harry Rex, and Ozzie, the Sheriff of Ford County reappear in Sycamore Row. The new characters of Lettie Lang, Judge Atlee, Herschel, Ramona, Ian, Seth, etc. have also been very well portrayed. But it is the climax which takes the prize in the end. It is just brilliant and a true mark of Grisham’s prowess.

“Lettie Lang is not my client. The estate is, and it’s my job to enforce the terms of the will that created the estate.”

Whether you’re a Grisham fan or not, whether you’ve read ‘A Time to Kill’ or not, I strongly recommend that you read Sycamore Row. With amazing court scenes, great characters and an unimaginable climax, this book is a definite winner.
Book Review John Grisham Sycamore Row
by Ravi
Leave a Comment
Prev: End of Story | Arjun Shekhar | Book Review
Next: Tiger Mates | Amrish Shah | Book Review