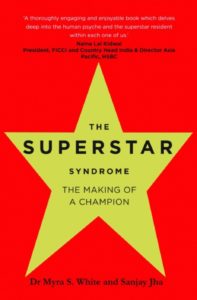 “Always be yourself, express yourself, have faith in yourself, do not go out and look for a successful personality and duplicate it.” – Bruce Lee.

The above quote beautifully summarizes the content of The Superstar Syndrome: The Making of a Champion.  What is it in superstars that make them so special? What qualities do they thrive upon? Are they born that way or can they be nurtured too? What is it that attracts the whole world around them?

In this book, Harvard professor Myra S. White and Sanjay Jha (Executive Director, Dale Carnegie Training – India) bring together a nine-step plan which talks about how to discover the superstar in us. The book exhaustively covers each and every aspect of success, with the theory being thoroughly complimented by well-suited examples. The recommendation from Naina Lal Kidwai, the President of FICCI, is quite impressive. With the title, jacket and cover adding to the glitz and glamour of the book, it is one “helluva” head turner.

With real-life examples from the stories of 80 superstars and association of concepts with the fairytale of the Wizard of Oz, The Superstar Syndrome: The Making of a Champion makes for an absorbing read. It is these two things which differentiate it substantially from other similar works in this genre and gives it an interesting character. Also, unlike other books on similar lines, this one captures examples of people from all walks of life – sports, movies, performing arts, literature to business and even medicine.

Though this book clearly chalks out the path to success, I don’t care if I learned the ways to become a superstar or not, for there is something which I am definitely taking home from this book. That something is about brilliant and effective marketing. I will illustrate what I think makes this book an outstanding example of good marketing. First and foremost, Ms. Naina Lal Kidwai prominently sitting on the jacket speaks for itself. Then, the way examples from all fields, and not just management and business, communicates with and serves a wider audience base is excellent. Also to be noted is the fact that examples from the Indian industry are abounded and plentiful which again caters to the larger Indian population.  I was really happy to learn about so many lesser known Indian giants – Gurcharan Das, Anu Aga and Tulsi Tanti to name just a few.

However strong the marketing effort (especially the content part) may be, one thing cannot be left unmentioned and that is the poorly edited Indian content. It seemed like the whole book, barring the Indian examples has been edited or alternatively, no Indian was consulted in the editing process. The way the Indian names have been so grossly goofed up is pathetic and shows lack of proper co-ordination between the foreign author and her Indian counterpart. Narayan Murthy becomes Narayan Murphy, Anurag Basu becomes Anurage Basu and Suzlon Energy becomes Sulzon Energy. This mistake is grave and unfortunately unforgivable, for it hurts the egoist patriot in me and urges me to rate The Superstar Syndrome: The Making of a Champion a notch down from what I would have otherwise. All in all, a one-time read; could have landed in the league of Abhijeet Bannerji and Esther Dufflo’s “Poor Economics” and Alexandra Harney’s “The China Price” but somehow barely managed to count itself in “The Making of Tesco’s” league.