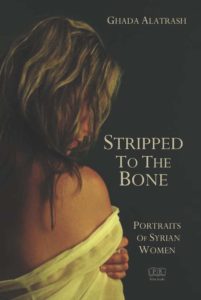 Syrians are probably the most unlucky people in this world. All the war and violence has not left them any peace let alone a normal family life. Ghada Alatrash, in this compelling piece of fiction, brings to us a few portraits of Syrian women who have been scarred and burned because of the violence in their beloved country. “Stripped to the Bone”, though a piece of fiction, is quite reflective (I believe) of all the tragedies and grief which Syrian women go through daily.

The book has seven stories or seven portraits of Syrian women. Each of the stories is named after the main character of the story, for example, Zahrah is the story of Zahrah and Ward the story of a woman called Ward. Ghada Alatrash writes with finesse and the most enthralling quality of her writing lies in the fact that it is full of passion and love for her home country, Syria. She speaks of Syria as the ancient land, which for ages, has been known for its culture and generosity.

By means of her fiction, she touches upon the topics which are closer to her heart – those which highlight the social evils and hypocrisy in today’s Syrian society and those where the women have to bear the brunt of a patriarchal society. The plethora of Syrian women from various walks of life is brought to the front by her diverse portrayals and realistic storytelling.

What I also liked about the book was the Alatrash’s tendency to impart knowledge wherever she could. Almost throughout the entire book, she has tried to explain the meanings of relevant Arabic and Persian words. She has also strived to highlight the culture of which she is so proud.

Another interesting and noteworthy thing is the beautiful poetry which the book is so full of. Ghada has included poetry from some of her favourite Syrian poets and interspersed that with her lovely fiction writing. The resulting effect is purely intoxicating. “Stripped to the Bone”, I believe, is a very successful attempt to bring the reader to a closer understanding of Syrian people and their culture.

The book is also informative. I came to know many interesting facts about the Syrian history. Overall, the book is indeed a charming one and thus comes as a highly recommended read from me. I end this review by rating this book four out of five stars and with hopes of reading many more such beautiful works in future.