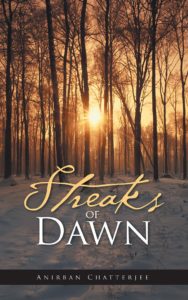 I remember reading the quote somewhere and deciding to always stick to what it says. It is beautiful, telling us why marriage is special and why we must never give up on each other. So recently, when I finished reading the “Streaks of Dawn”, I could not help but recall this beautiful quote.

“Streaks of Dawn” by Anirban Chatterjee is the story of the loveless and lifeless marriage of Ayan and Hiya. Ayan is a 30-something professional who works for a Japanese multinational and is suffering from an acute crisis at work. Hiya, his wife, is a respected journalist who juggles her responsibilities at home and work with utmost dedication. Their marriage has long lost its sheen and Ayan constantly finds himself drawn to other women around him. Hiya is aware of his casual flings but suffers in silence because of their son Arush.

Emotionally disconnected from his family, Ayan reconnects with his college crush Jahnavi. Jahnavi is herself suffering from a rather dull marriage and finds solace in Ayan’s company. The two, however, are separated by hundreds of kilometers, which makes it impossible for them to meet. To further fill the void in his life, Ayan also starts a tumultuous affair with his best friend’s wife Snehal. Snehal is the victim of an abusive husband and soon starts to fall for Ayan.

Very soon, Ayan realizes he is playing with fire and has to make a decisive choice. So, who will he choose? His wife Hiya or the long-lost crush Jahnavi? Or will it be the young and beautiful Snehal? Whatever he does, there will be consequences to bear and no matter how hard he tries, he will not be able to escape the ill effects of his misadventures.

The book has a decent plot and strong characters. The main plot focuses on the story of Ayan while the others tell us the story of Snehal, Rajeev, and Jahnavi. As is expected of a drama, the story is intense and is told from a third-person point of view. It is neither fast paced nor slow and the story moves at a decent speed.

The characters are a complex bunch, each having myriad hues. There are negatives and positives in all the characters and hence they all are neither black nor white but a shade of grey. I liked the way in which the author has developed each character in depth. Ayan is described in vivid details; all his traits, his strengths, and weaknesses are laid bare to the reader in a wonderful manner.

What actually turned me off “Streaks of Dawn” was the complex usage of words and the not-so-appealing writing style. Had the author written in a simpler way, the book would have been a pleasurable read. A lot of sentences were really long and not properly edited. For example, a sentence reads – “But nowadays, he could see a dark shade beneath his eyes, visibly showing up tensions, and his face was smeared with rugged lines and he could see, even streak of white in his unshaven beard and a tinge of yellow on his teeth which may be the result of consuming innumerable cups of coffee in tension hours.” The sheer length of the sentence is enough to put someone off the book. Hence, the editing and the writing definitely put me off.

Since this is a drama book and not a mystery and suspense one, the climax does not play that important a role. The climax of “Streaks of Dawn” is mediocre and maybe a little predictable too, but the end is satisfactory and befits the story.

The last leg of this review is the entertainment quotient which was low because of the writing style and the poor editing. Even though the story and characters were good, they did not make up for the other inefficiencies. With some good effort on these two areas, the book can become a really good read. Nevertheless, it’s a good story and worth a read and hence I congratulate the author on his effort and wish him all the best for his future works.

You can buy “Streaks of Dawn” from the links below.