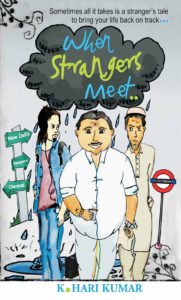 I got to know Hari through a Goodreads forum and learnt about his book When Strangers Meet while it was still in pre-release stage.

There’s a line in the blurb – “How will the tale from Iyer’s past affect Jai’s future?”

This is what caught my attention and drew me towards reading this book.

When I received this book from Hari, I was reading ‘The Cavansite Conspiracy’ but I decided to leave it in between and take up ‘When Strangers Meet’.

The book is mostly about three different characters who are chanced upon by fate to meet each other while stranded in a Metro Station.

The first character is that of Jai Prakash Sharma, a troubled and unruly teenager who dreams of making it big in the animation industry.

His father, Mr Prakash Sharma, is a mathematician and wants his son to be an engineer. Unable to bear his father’s authoritative nature, Jai has run away from home and is now stranded in the waiting room of the Ghittorni Metro Station.

The second character is that of Hussain, a petty tea shop owner who is facing troubled times because of his poverty. He is soft-spoken, kind-hearted and a devout Muslim.

His troubles are over, now that he has won a lottery worth 50 lac rupees. To claim the amount, he has arrived at the Ghittorni station and is now stranded at the waiting room.

The third and the best character in the book is that of Krishnaprasad Iyer a.k.a. Iyer.

Iyer is from Madras and works there in the Municipal Corporation. He has arrived in Delhi for his father’s treatment and is now stranded in the station’s waiting room.

This is how these three strangers meet.

Now Jai finds himself in the same situation that Iyer was in, 15 years back.

How does this 15 years old story of Iyer affect Jai’s present and future forms the rest of the story.

Major turn-offs in the story are the writing style and language. There are numerous printing and grammatical errors.

Certain narrations which could have been funny were not. The author should have shrunk Iyer’s past a bit; it gets repetitive and out of place after a time.

The best thing – The Climax.

This is truly one of the better climaxes and deserves applause. It couldn’t have been written in any other way and hats off to the author for this lovely ending.

The last few pages will sweep you off your feet; it will make you cry and give you that ‘Chicken soup for the soul’ feeling.

I can’t stop myself from giving a hint here – ‘Iyer is not what he seems to be’.

I will definitely recommend you to grab this book. It can be read in 6 hours’ time and it would be a time well spent.

Read this book to know –

“How does Iyer’s past affect Jai’s future?”

“Is Iyer what he seems to be?”