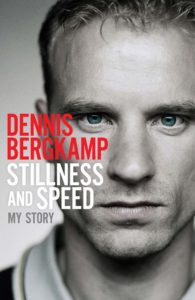 If you ask fans of Arsenal football club who they think their best player was, Dennis Bergkamp would certainly be in most peoples’ top 5. The Dutch international was a player that was in the mould of the great Johan Cryuff, someone who wanted to play football the way it should be played, with beauty and grace. His most impressive years were for Arsenal, but he also played for such prestigious clubs like Inter Milan and Ajax. He won trophies in England and was part of the immortal invincible Arsenal side that went unbeaten the entire campaign in the 2003/2004 season.

Football books and biographies are generally not known for their artfulness. In most cases, the reader is made to slog through season after season of what happened, things that most fans would have already known. But Bergkamp’s book, “Stillness and Speed”, that was written with the help of David Winner is as intelligent as his game was. Winner is known for being able to make football players articulate, by asking questions that will make them talk about the game. He does a fantastic job with Bergkamp, and it is easy to see why Dennis would have chosen Winner to be the author of the book.

The book is not a blow by blow account of each season, and that is what makes it most interesting. Throughout all the pages, you can see how Bergkamp thinks and why he is a genius both on and off the field. Winner writes the book in the style of an interview, asking Bergkamp to give his account of what happened in his career and then asking his peers during those times to give their interpretation of what happened. The comparison gives both views, and this is especially relevant in the case of his time at Inter Milan and the coup that Cryuff pulled off at Ajax.

While this may not really be a draw for those who are not football fans, it is a great recommendation for people who want to know how geniuses work. A particularly revealing trait of Bergkamp is the amount of practice that he puts into his game, something which tells you that even the best of them don’t have it easy, and they do all the hard work necessary to make them reach the heights they have scaled.

You may not like football, but if you want an understanding what makes a talented person a genius, this is a must read book.