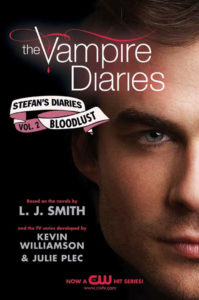 I am an ardent follower and worshiper of the Vampire Diaries, the legendarily famous TV series developed by Kevin Williamson and Julie Plec. Some time back in mid-2013, I got the chance to read the Stefan’s Diaries Volume One: Origins (I had wanted to read it since a long time and finally I could manage both the will and the time to do so). Finally, it took me yet another year to finish the second volume in the series i.e. Bloodlust. Moving on to talking more about the book and less about my history with it, let’s talk about the storyline.

In Stefan’s Diaries #2 Bloodlust, Stefan, after forcing himself and Damon into becoming a vampire (by convincing him to feed on a human and thereby completing the vampire to human transformation), finds himself sneaking at the funeral of his dead father. But before he can dwell on the events which led to his father’s death, both Stefan and Damon are spotted by Jonathan Gilbert. What follows is a mass attempt to capture the now demon sons of Guiseppe Salvatore.

Finding themselves at the brink of their life, both brothers run like hell and land in a train headed for New Orleans. Damon still crossed with Stefan for having turned him, decides to leave on his own. Stefan now lonely discovers the company of a friendly vampire Lexi and her friends. Once on an outing with Lexi, Stefan sees a poster which makes his whole world turn upside down. The poster proclaims a never before fighting sequence, that between a mountain lion and a hungry vampire, and on the poster, painted in life size image, is none other but Damon.

So what will Stefan do? How will he rescue Damon from the devilishly cruel captor Patrick Gallagher? Will Lexi help Stefan? What about the cute girl Callie? Will Stefan declare his love for her? Will she help Stefan in rescuing Stefan from the captivity of Patrick Gallagher; her father? Or will he let her go away? To know about this sensational sequel to the Origins, do grab a copy today.

The book is an absolute treat to read. I loved the suspense created Damon’s captivity and his fight with the mountain lion. I also liked the angle of Stefan’s romance with Callie Gallagher. Lexi and her friends were also interesting to read about. The best part of the book remains the ease with which the author turns events and creates new plots and new twists. L.J. Smith continues the magic which he first started in the book Origins though I was hoping for some more of Katherine, even in the form of memories or flash back.

In the end, I recommend Stefan’s Diaries #2 Bloodlust to all young adult and fantasy lovers especially those who are enthusiastic vampire fans. This is definitely a not to miss series and I am sure will savor every inch of what you read.