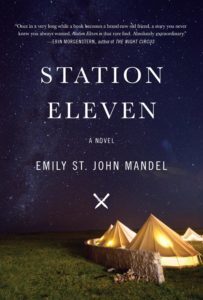 It is not every day that you come across a book which sweeps you off your feet.  A book which will leave you dreaming about the world you just read about. Which will make you want to live in the world which it talked about. Station Eleven is such a book and I assure all my readers that it will not disappoint you in the least bit. Beautifully crafted plot along with an extraordinary theme, full of emotions and drama with just the right dose of thrill and adventure; this book will not let you get off its hook until you have read it in its entirety.

Georgia flu arrived in North America and within a few hours everything was lost. The lethal virus reduced the global population by ninety nine percent. Where there was once all the luxuries of the previous world, there is not even electricity now. After twenty years of the apocalypse, people continue living in various newly formed groups – some democratic, some military and some anarchical in nature. Wherever these groups have settled; usually in families of three to ten, settlements have sprung up. Due to lack of trust, lack of any kind of information and violent past experiences, people do not travel. They stick to their towns; the ways of the former world long forgotten.

Battling the new formed insecurities, severity of the weather and many unspeakable perils, The Travelling Symphony maneuver their way between hostile towns and dangerous territories to keep moving, the only force driving them embedded in the famous Star Trek: Voyager line which beautifully graces their caravan – Because survival is insufficient.

Emily does a beautiful job of intermingling the lives of the main characters of the book, frequently swinging her narration between different time periods and different sub plots. The beauty of the book lies in the way all of the characters and sub-plots come together in the end. The progress is so gradual and so flawless that the reader has no choice but to awe at the author’s brilliance. The characters are also deeply evolved and they become an indispensable part of the book. Almost all the characters have the ability to create a lasting impression on the reader. You dread and also pity the Prophet and you love Miranda and Kristen. You admire Clark and Jeevan and you also feel somewhat emotional towards Arthur. They are all wonderful and charismatic in their own ways.

I think by now it must be clear that it is not for nothing that Station Eleven is in the nomination for the goodread’s choice awards in the category of best fiction book of 2014 and has an average rating of 4.04 on the goodreads website; having been read and rated by 9377 readers worldwide. I therefore give Station Eleven five out five stars and recommend it to all my readers.