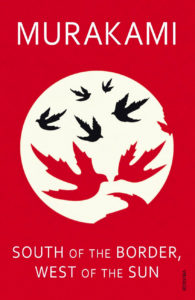 After spending almost an hour wondering how to do justice to this work, I’ve realised the best way would be to begin by stating outright what South of the Border, West of the Sun isn’t. Firstly it isn’t a raunchy novel about a man’s bizarre bedroom fantasies; if that’s a letdown, Mills & Boons are always available at your local secondhand store. Neither is this book a soul searching travelogue, taking you across continents, to that quaint spot where one goes to heal his wounded ego. No, the title certainly has a bit more depth than that. Rather, the title is an allegory which alludes to the vagaries of life, like a pendulum, swaying between agony and ecstasy.

South of the Border, West of the Sun portrays the story of Hajime, a youth born in post-war Japan to parents of average middle-class standing.

South of the Border, West of the Sun portrays the story of Hajime, a youth born in post-war Japan to parents of average middle-class standing, his interactions and relationships with people through life and his struggles, in later years, to shake off a listless existence. The longing for association with the right person is what Hajime has been seeking from his childhood days; but like the hands of a clock which cannot be wound back, actions of the past cannot be undone. Practicality triumphs over a painful wait and Hajime settles down. At thirty-seven years of age, Hajime is married to a caring woman and has two daughters he dotes on. With some help from his father-in-law, he starts and successfully runs two Jazz Clubs in an uptown district of Tokyo, and has made enough money to secure his children’s future. However, with each passing day, he is losing the will to carry on this mundane existence. He knows he has nothing to complain about, yet he can’t come to terms with this excuse for a life.

Written as reminiscence, the novel is the work of a deft story teller, in that words are subtle and emotions play out implicitly. The characters are eloquent, witty, and expressive without having to spell out every word.

At a little more than 200 pages, South of the Border, West of the Sun is hardly a day’s read but filling to the rim. There are no sudden twists or skeletons stumbling out of closets to bring back hounding memories. It is a rather simple narration which tells a story at a calm and steady pace, something akin to a stroll on a winter’s evening. Some may find it boring, or a tad bit sluggish; Murakami is more an acquired taste. As for me, after completing this, books I’d read in the past seem like a mindless cackle. Do give it a try.