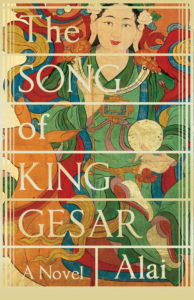 Being an Indian, I am always curious about our neighbouring countries. We have a number of countries bordering us along all the sides, but it is the North-Eastern border that specially allures me. Having read the “The King’s Harvest” by Chetan Raj Shrestha, I fell in love with Nepal and the distant Indian state of Sikkim, and now this book made me a fan of the beautiful country of Tibet. The Song of King Gesar is Alai’s attempt to bring to the forefront, and popularize, the Tibetan epic of King Gesar. It is said that this epic is to Tibetans what Mahabharata is to Indians and Odyssey and Illiad to the Greeks.

As incapable as I am of rating such an epic, I will nevertheless try to do so for the benefit of my readers. The book was originally written in the native language and has been translated from the same by Howard Goldblatt and Slyvia Li-Chun Lin. It tells the story of the ancient country of Gling which was established by the human incarnation of the celestial being Thosba Gawa. Thosba Gawa, the heavenly God chose to descend upon the human country of Glingkar to deliver its people from miseries and bring upon the path of peace and harmony in the grief-ridden country.

Upon his birth on Earth, the celestial being was named Gesar but later due to lack of beauty and his apparent ugliness he soon came to be popularly known as Joru. Joru was banished along with his mother by his evil intended uncle Khrothung. All this happened before Gesar defeated evil demons in and around the land and righteously settled himself as the King Gesar of the newly formed country of Gling. To narrate the whole story of The Song of King Gesar or even attempt to summarize it would be a tedious task and unfair.

What I can assure is that anyone with even a slight interest in world cultures, traditions, customs or religions should have a go at this book. I myself was amazed discovering the fact that, in principle (not in characters or plot) the story is very similar to the message which the other epics tell us. What is more interesting is the fact that the author has managed to uphold the interest of readers throughout the book by interweaving the story of the epic with the story of a normal shepherd turned Grungkan (someone who sings ancients stories and epics) Jigmed. How Gesar and Jigmed discover their true self, and how their paths are made to interact in the course of the book is indeed imaginative and brilliant. I give The Song of King Gesar four stars, not for the entertainment quotient but for the cultural value it embodies and the heritage it contains.

Note to the readers: This is not a book for regular readers, trust me you will not find it least bit interesting if you are looking for a regular read, but this is surely a book for those with interest in history and culture.

I request you all to give your comments on the book/review by dropping a line below.