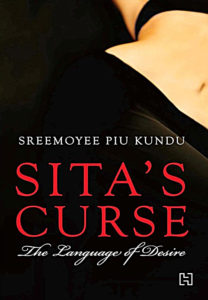 Sreemoyee Piu Kundu’s “Sita’s Curse – The Language of Desire” is one attempt to bring back erotica into Indian literature. It is the story of Meera Patel, who shares her every moment with her twin brother Karthik, but due to a combination of fate and her family, loses him forever. She is married off to a Mumbai businessman but is completely neglected by her husband and her family, especially because she has not been able to give them a child, through no fault of hers. From an early age, Meera is on the lookout for a release of her sexual desires, but they all happen as a form of abuse and she’s taken advantage rather than given the love she deserves. Finally, Meera does find the man to fulfil her desires, both emotional and sexual, but once again, fate plays a hand in her life.

While the book might look like it was an Indian version of “Fifty Shades of Grey”, there is an actual plot line and a very well narrated story here. It is not simply about sex, but rather it is the story of every woman who is trying to explore their individuality and trying to find their strength when society is all about curbing their freedom.

Indeed, the author does a fine job in narrating the story of Meera Patel, and it could very well be the story of every other middle class, conservative woman who can do nothing more than following what the society dictates is proper behaviour. While men talk about their sexual desires openly, women are looked down upon if they do. Also, it is not just about the erotica in this book. The author was able to capture the city of Mumbai in all its good and bad.

If you expect a book that will titillate you, then this is not for you. If you are looking for a solid plot with well-developed characters along with the erotica, then this certainly is one you should pick up. Even if you are uncomfortable with female erotica, I would suggest you read this book to see what a regular Indian female has to go through to try and live a normal and fulfilled life.