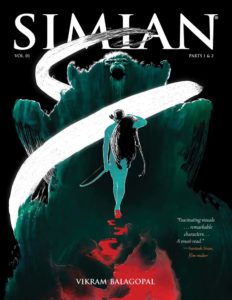 Comic-Con India was inaugurated in India in the year 2011 and has since gained wide acceptance and popularity countrywide. It was in the year 2014 that the book “Simian” won the award for the best graphic novel published in that year.

Of an intriguing name and cover, the book is as enchanting as the illustration which decorates its jacket and is divided into two volumes where part one and part two are in the first volume and part three being made into volume two.

The story of “Simian” is based on the chance meeting of a warrior and a God and what results from the meeting.

Hanuman is towards the end of his days resting his time out in the confines of a deep forest when he comes across Bhima, a seasoned warrior on his way to find an exquisite flower desired by his beloved Draupadi.

As soon as they realise who they are, they sit down chatting and catching up on the days gone by and that is where the main story picks up.

Hanuman begins by narrating the story of the Ramayana and thus the story is told as seen through his aged but wise eyes.

The author though sticking to the original story adds his own renditions here and there, making the story every bit interesting and novel in its own way.

I liked the way the story starts, for the meeting of Hanuman and Bhima is so bewitching that it is bound to make one flip through the pages back and forth multiple times.

The illustrations are awesome.

I particularly liked the novelist’s presentation of Rama and Lakshmana in the kind of clothes they wear. Hanuman too looked really dramatic with the tasteful headgear that he wears.

The way the book is all in black and white except the few places where celestial beings make their entry (Indra, Goddess Lanka etc.) is also beautiful and imparts the characters a mysterious aura.

The story progresses and frequently shifts between the past and the present.

The time where Hanuman returns from his first mission to Lanka after meeting Sita and giving her news of Rama is where part two and volume one of the story ends.

Overall, the novel is an excellent read and is bound to delight the reader by all means. It has the perfect mix of an excellent theme, beautiful illustrations and a strong presentation.

In the end, to be very honest, until now I was not really into comics and least of all graphic novels but “Simian” has convinced me to include at least one graphic novel in my monthly to-read list.

That being said, I recommend this amazing book to all my readers and eagerly await the author’s next.