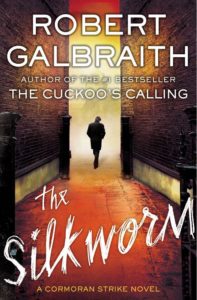 For any author of a successful series, it can be difficult to write a story that does not revolve around the universe created in that series. Some successfully do it, some cannot replicate the same success they had with the series, while still, some others fail miserably. And for JK Rowling, with her fabulously successful Harry Potter series, it was that much more difficult to be able to write something that would not be constantly compared to it. And so, she decided to start another series, under the pseudonym Robert Galbraith.

“The Silkworm” is Robert Galbraith’s second book in the Cormoran Strike series, with the first instalment being a hit. In this, the story continues 8 months after the events following “The Cuckoo’s Calling”. Having risen to fame thanks to his previous case, Cormoran Strike is now relatively well-to-do, with wealthy clients hiring him as a private detective. But one day a woman comes to his office and asks him to find her husband, Owen Quine, an author gone missing. Strike decides to take up the job and finds himself in the middle of a tale of secrets that someone is more than willing to kill to keep them from coming out. How Strike solves the case forms the crux of the story.

With this book, the author takes us into the literary world, with the many workings and politics that take place in it. Readers looking in from the outside will certainly find it fascinating to know about all the various roles play, from publicists to publishers. Add to that a plot that has a new twist at every turn, you are left with a potboiler that you will get immersed in. In true Rowling fashion, the book is very entertaining, with all its insights into the publishing industry.

Of course, as with the author’s books in the past, there are quite a varied set of characters, something that you don’t usually find in this sort of detective novels, and that is by design. You want to keep the focus on a few central characters, and you use plot twists to guide the reader through to the end. But in Rowling’s world, more is good. At times, though, this does not bode well for the pace of the book, making it appear a bit repetitive and long, especially since the focus is not on fully developing any of these characters.

In the end, though, The Silkworm would inevitably be compared to Harry Potter by the reader, and as such, there is no magic in this world, Rowling certainly turns on the magic to keep the readers glued to the pages.