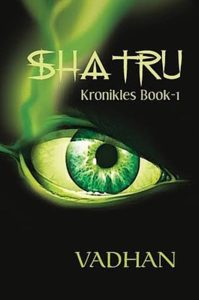 Writing a fantasy fiction is no cakewalk. It takes elephantine courage and an equally gargantuan imagination to come up with something which can be garnished and served as fantasy fiction to an audience who have basked in glorious worlds of Narnia, Hogwarts and their likes. But Vadhan here not only attempts to do the unimaginable but does so most ingeniously and beautifully. The plot and the story line of Shatru Kronikles are not just exceptional but also appealing and fascinating. It does a wonderful job of convincing you about the world of Shatru and the realms of the primordial tribes.

The book starts off with the gruesome but intriguing murder of Kausalya, a top official of a multinational corporation. How the murder connects itself to the realms of Asuras and Devas and the union of the two to fight their common evil is quite interesting. I really liked the way the two separate worlds much like the muggle and non-muggle worlds of the Harry Potter series are connected in this book. For as just mentioned, the book too has a concept of humans on one hand and demi-gods & gods on the other. Both exist parallelly but humans are not aware of the other world. But that’s where all the similarity with any other fantasy fiction ends. All that follows is a work of pure imagination and author’s sheer brilliance.

The book explains about the world of the hero “Ajatshatru” or “Shatru” as he is more commonly referred to.  His world and the idea was a little complicated for my taste as there were just too many tribes, gods, demi-gods, primordial tribes and other creatures. So somewhere near the end of the initial chapters, the book gets a little too much to absorb but the author picks up well in the later part where the hero and not his world is given the major chunk of importance. I really liked the character of Shatru and his mate Kris. Together they bring life to the story and makes it going.

The author shows promise and that is most highlighted by the fact that the concept of the book and its deliverance is very well formed and managed. The storyline is continuous and focuses on one major plot. The blend of mythology with fantasy is a near perfect one and the narration is such it makes every written word go alive. I enjoyed the book a lot and would love to read the second part. In terms of originality also the book ranks much higher than most other contemporary Indian works. All in all, the book is a pleasure to read and I would, therefore, recommend it to all my readers.