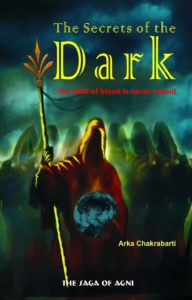 The Secrets of the Dark is the first book in the series of ‘The Saga of Agni’. Written by debut author Arka Chakrabarti, the book is nothing but sheer indulgence. In this book, Arka writes about the mystical land of Gaya which is divided into two parts – the land of the rising sun and the land of the setting sun. These two lands stand apart from each other culturally and geographically, separated by various seas in between. Agni, the protagonist is a ward of the King Adhirath of Himadri (a tiny kingdom in the land of the rising sun). He grows up with Prince Yani and his friend Vrish. Vrish also happens to be the son of Briksha (the man who brought Agni to the King when he was just a child)

Agni knows he is an orphan and that he was brought to Himadri by Brisksha who had found him abandoned somewhere in another Eastern Kingdom. But little does he know that he is the prophesied destroyer, born of the royal seed of a King in the Land of the Setting Sun. He is the reason his parents gave their life, and that he may be the reason behind the end of the world and the destruction of the realm of men. He is the boy who escaped death at the hands of the seven guardians and that since his escape have been most searched by those seven guardians of the realm of men. Unaware of his past and the destiny which lies ahead of him, Agni is caught in a swirl of events which will unfold many well-guarded secrets and forever change the very course of his life.

Will Agni be able to survive the wrath of the seven?

Will he discover the truth of his birth?

We will really fulfill his destiny as the “destructor” of mankind?

The author writes very interestingly and has a very promising future. The plot and the characters are all very gripping and will keep you hooked till the end. The language is kept simple and therefore easy to understand. The author’s ability to create an intriguing fantasy and serve it with the right amount of mystery and thrill will definitely entice the reader. I liked the use of facts, history, symbols and ancient theories and I specifically admired the way that the author has connected all of these with the main story.

However, no matter how good the plot was, I found a few things amiss. First of all, in the initial chapters there was a striking similarity to George R.R. Martin’s “Game of Thrones”. Among many other things, the wall in the north which separates the northern wasteland from the realm of the men and is constantly guarded by soldiers to keep the dangers of the land away is very similar to Game of Throne’s ‘Wall’ and ‘The Night’s Watch’.  In addition to this, the thing which I found most disappointing was the poor editing. The book has many editing mistakes (I mean, I could find almost over 20!!!). People (read authors & publishers) should realize that a story as good as this one would be just another “me-too novel” with such a horribly done editing job.  I sincerely hope that the next book will find better editor and proof-reader.

All in all, I can promise you that this fantasy novel with tons of mystery and thrill will definitely catch your attention and will keep you spell bound till the end. You will be surprised to discover the mysteries of the land of Gaya and will be impatiently waiting for the next book to come. In the end, I hope that the author keeps up the good work and improves where this book was lacking and as for I myself am eagerly waiting for the second part.