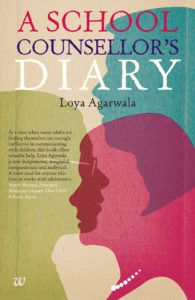 Sometime back, while scrolling through Westland’s reading list for a particular month, I found A School Counsellor’s Diary. The title was so catchy that not bothering to look on the internet about what the book was, I casually ordered it as a reading preference. Much later, after the book had been sitting on my “to-read” list for quite some time, I decided to finally read it. Before, I begin with my review here, a quick insight into why I ordered the book: you see my cousin is also a school counsellor and she keeps talking about the ups and downs of this occupation, so I thought – why not, let me go ahead and read the authors’ opinion too, and then maybe I can gift it to her as well.

But, as soon as I opened the pages I realised it was not a work of fiction, as I had ignorantly assumed it to be. Shattered, I dispassionately started reading this seemingly boring piece of non-fiction. Within fifteen minutes of into the book, I realised that my hopes were not entirely unfounded as I did get to discover the mysterious world of a school counsellor with an added bonus of a list of to-dos and not to dos as a parent of a child. Though the parent thing is still a somewhat distant future for me, it deeply educated me about the intricacies of a child’s mind. Often during the course of the book, I found myself reminiscing about my childhood, and reflecting upon how different my childhood would have been if Loya Agarwala had chosen to write this book back in the 1990’s. That being said, let me clarify that I devotedly respect my parents and the way that they have brought me up, but even then there are intricate details which this book highlights and which often escapes the regular eye.

Filled with numerous examples of her own students, Loya highlights various problems which a child, more specifically a teenager, goes through during the course of his or her growing up. The topics covered are as wide as the concept of quality time, the expression of individuality and how to handle it, discipline and different types of parenting styles, to physical and sexual abuse, conflicts in-house, addictive behaviours and even death and grieving. In addition to this, there are also other concepts which are briefly spoken about every now and then in the book. What I specifically liked was the approach taken to bring out these issues.

The way the issues have been brought to the fore is by the extensive use of examples so that even if the reader wants to skip a session every now and then, he will definitely go through the examples by which they are explained. At the end of the day, A School Counsellor’s Diary is a kind of self-help and parenting book, which definitely is a must read for all parents and teachers and would-be parents. For others, it may seem a boring read as it may not be as relevant to them as a general read.