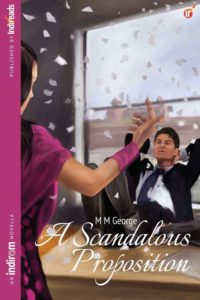 Having enjoyed quite a lengthy break from my books, I sat down to read some romance books. Browsing through my kindle unlimited list, “A Scandalous Proposition” is the first one that I found tempting and zeroed on. I was not disappointed for this was just the one I was looking for – a chick lit romance sprinkled with just the right amount of passion and lust (and mind it, I say lust and not sex). So read on, if you wish to know more about it.

Mira Talwar is your typical middle-class Indian girl with her values and traditions deep rooted in her psyche. Reema, her sister is also the same when it comes to holding on to her values. Both their lives are shattered when their father is killed in a riot in Meerut and they, along with their mother, have to go and live with their aunt in Delhi. To help ease the financial burden on their Uncle, both the girls find themselves working hard. Mira gets employed with the Dewan Group of Industries, where she comes across the scandalously sexy Ranbir Dewan.

Sparks fly and galaxies collide when a chance encounter brings them close physically. Mira, ashamed but also a little-tempted, deals with her mixed feelings but that is before Ranbir throws a scandalous offer her way – in exchange for a handsome amount of money, Mira should become his mistress. Shell-shocked and angry as hell, Mira leaves immediately and decides to never cross paths with him again. But is that what the fate has in store for her? Will she be able to trick herself into believing that she doesn’t equally want Ranbir? Will her middle-class ways give away to something scandalous? Know this and much more in this tantalising tale of love and lust.

All of 87 pages, “A Scandalous Proposition” can easily be done within a mere 2-3 hours break. The language is simple and so is the storyline. If you are looking for sex, this is not the book you would want to read, it’s just a simple romance with a little bit of lust. If you are looking to satisfy the literary genius in you, this is not your book too. However, it does gives you a sense of satisfaction on having read a good piece of fiction. What it also does is content your romance craving soul.

MM George knows what she is good at and plays at it. The heart and soul of “A Scandalous Proposition” are its characters and the author has spent a good amount of time and effort on them. They all are adorable and vivid. Somewhere in the course of the book, they all win your hearts and you just want to keep reading about them. Thus, in my opinion, the characters are surely a work of genius. There might be some clichés in the book (for the risk of spoilers, I am not disclosing those here), but I believe in fulfilling the story they were necessary. The climax is not that extraordinary. However, looking at the book from an overall perspective, it does seem to provide the entertainment it promises through its title and cover.

My final rating will be three and a half out of five stars with a recommendation to all romance lovers to give “A Scandalous Proposition” at least one try.