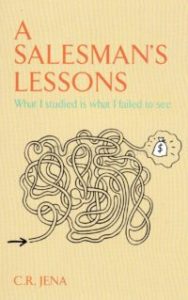 “Sales is a daily fight, a daily hell,
This any salesman in the world would tell
But then how should we sell?
How to do make sure the sale is done well?
Worry not, for this book will show you
Exactly how to ring the success bell..!!”

A Salesman’s Lessons is a book authored by C.R Jena, the Business Head of Mahindra Satyam in South Africa. In this book, he writes about his experiences as a salesman and what others can learn from it. The author makes use of various theories from mathematics, physics, biology and physiology and also many incidents from history, ideas from literary works, and some random experiments by known scientists.

His conclusions are not deduced from extensive surveys or research but from his own understanding because of his experience in the field of Sales. And that, I believe, is a good way to put down someone’s experiences. A Salesman’s Lessons has both positives and negatives. I shall talk about the positives first. I liked the way each chapter is divided into a theory, a postulate or some incident (mathematical, physical, historical, mythological biological etc.), briefly described in a layman’s term and then finally explained in terms of its relevance in the field of Sales. Some of the ideas were really good and convinced me of the significance of implementing them in a fairly good manner.

I really liked the idea of a creating a “www” by the way of a chart or a diagram. It will surely have immense value if applied sincerely and now that I am going back to my beloved marketing profession, I will make it a point to do it right away. I also liked the suggestions regarding how to recall somebody’s name when you meet them, this is something which I faced a lot of problems in, as in just the first week of the start of my career I had met almost 200 new people and remembering their name was a big difficulty for me. Apart from these, I also liked some other chapters especially those on the 2 theory and 80-20 rule. Jena has successfully, at many places, changed my notions and perceptions about those theories and statements.

Now coming to the negatives, I believe A Salesman’s Lessons was a little repetitive as there were many chapters in which a single statement was written, rewritten, explained and re-explained in many different ways. So, surely crispness was lacking a great deal. Also, though many chapters were insightful, many were a little unrealistic; I say this not because I possess great knowledge on the subject but because they simply couldn’t appeal to the saleswoman within me. In addition to this, there was a chapter relating to PERT & CPM methods, in which I found a major mistake. The mistake, though I believe was one pertaining to the mistake in editing than in calculations, could greatly alter the understanding of the concept which it tried to explain.

All in all, A Salesman’s Lessons definitely has some learning to take home and benefit from. It is good and should be read by anybody who is even remotely associated with sales. I wish Mr C.R. Jena, all the very best in his career and for his future works, you surely have given me a lot of things to learn from.