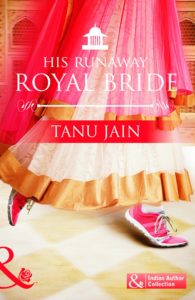 Ever since Mills & Boon have come up with their Indian Author Collection, I have been a huge fan of them and that is simply because of the fact that they tune to my Indian background and at the same gives me what Mills & Boon is best known for. His Runaway Royal Bride is my first book from the author Tanu Jain and at the end of the book, I can surely say that I will be looking forward more such works from her in the future. The story is set in a royal household of Samogpur where Maharaj Vidyamaan Veer Singh, a young royal, takes the teenager Meethi as his wife after having been swept off his feet by her.

Meethi giving in to her father’s wishes and the charms of the young royal, readily agrees for marriage in the royal household. She has everything which a girl can ever hope for- a handsome husband, a caring father, a royal status and loads of money at her disposal, but despite all these, she is never happy. Reason are the numerous pressures and countless duties which come from marrying into a royal household. She is left suffocating and one day she decides to fake her death and run away from her royal life for good.

So what will happen to Meethi? Will Veer ever be able to discover the truth behind her death? Will he ever be able to get her back? And what about Meethi’s dream of becoming an artist? Will she ever be able to continue her studies and pursue painting? What will become of this beautiful young pair, only you can find out in this gripping novel of high voltage family drama and emotional upheavals.

Tanu Jain writes with a certain charm and the story is quite a unique one at that. I liked the strong plot and the high quotient of family drama. It reminds one of the typical saas-bahu serials which are flooding the Indian television space these days, though one may not be such a big fan of them (neither am I), but then, it does adds the spice quotient up for such novels. I liked the character of Maharaj Veer Singh, he is somebody whom any girl can easily kill for. But somehow, I couldn’t bring myself to like the character of Meethi. She did not influence or aspire or interest me in the least bit. She was every bit dull and a little boring for my taste.

Overall, with an excellent story, I would rate His Runaway Royal Bride three out of five stars and would recommend it to all Mills & Boon fans.