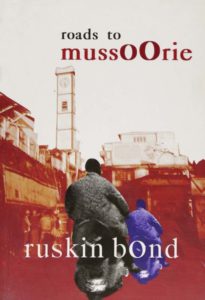 “Roads to Mussoorie” is an ode by the famous author Ruskin Bond to his home for more than forty years – his dear city Mussoorie. The book starts with a rather lame but nevertheless entertaining poem dedicating to all those “who love their books and spend their leisure, in reading both for worth and pleasure”. This poem, as the author states at the end, was composed on his way to Mussoorie from Shamli.

By the means of “Roads to Mussoorie”, Ruskin Bond pays homage to the beautiful town of Mussoorie, its surroundings and its people all of whom have played an important role in shaping him as an author and as a human.  He starts the book with a backward (instead of a foreword) urging the reader to read the last chapter first before deciding to go ahead with the book. He also maintains that he is doing so (writing a backward instead of the usual foreword) because in this book he looks back at all the years he has spent in his beloved city and how this city has always given him a lot.

In this candid and funny chronicle of his life in Mussoorie, Ruskin vividly writes about his excursions to the various hill stations and hills in and around Mussoorie. He comments how he was never much of a climber but more of a steady walker. He journals about his various climbing companions and their different virtues, ultimately highlighting the importance of a perfect partner to enjoy a good climb.

Must Read: 35 of the Best Books by Ruskin Bond

He also reminisces, in part, about his days in London and Shimla and about his love for films. He illuminates the reader on the English movie culture that was once ever so present in the hill stations but is slowly dying down with the shutting down of most movie theatres of the town.

He talks mostly about tiny little anecdotes from his life in Mussoorie (and a few other cities) and about other mundane things like breakfast, trees, ghosts, parties and cold beers. The beauty of his writing lies in the fact that all these so-called mundane things don’t feel mundane anymore once they have been written about by Ruskin’s pen.

I simply loved “Roads to Mussoorie” for it gave me a very realistic and common man outlook of what life in the hills must have been like in those decades. The ability to bring beauty to the most commonplace of things is truly a feat which only a genius like Ruskin Bond can achieve. Also commendable is the passion with which he writes about nature and the hill people. Judging by his words he has nothing but reverence for those dwellers of the cold mountain terrain.

Needless to state, “Roads to Mussoorie” is definitely a recommended read from me and I would urge every Indian and every foreigner to do give this book a try to enjoy a slice of life from the Himalayan hills.