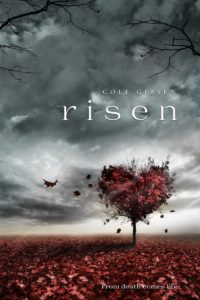 Risen (Blood Eternal #1) is a young adult fiction with elements of fantasy and horror. The book has it all – vampires, fairies, and magic. It also fits into the category of a paranormal romance or a vampire romance.

What is the story line?

Charlie isn’t really happy with the way her life is going. She lives with her aunt in an isolated cabin in the woods which much to Charlie’s disappointment is far away from everything she cares about – civilization, friends, and life. Her life changes when one day her aunt is kidnapped by vampires and Charlie has no clue whatsoever. Until now, she never knew that vampires existed. Now, she is caught between her desperation to get her aunt freed and her feelings for the handsome vampire, Sebastian.

Caught between a brewing vampire war, she needs to measure her steps carefully. In a world which is run as much by passion and love as it is by violence, Charlie’s safest bet now lies in trusting her kidnapper, Sebastian.

Risen (Blood Eternal #1) starts on an interesting note. The reader just like the main character is clueless about the existence of any kind of supernatural elements. The opening chapter shows Charlie cribbing about her life in the woods, but that changes soon when her aunt is kidnapped. The plot is developed slowly and steadily without getting the reader confused and uninterested.

I liked the way the world of vampires is introduced in stages. Though the main story revolves around Charlie, it is her story itself that branches out into different (and interesting) sub-plots. Some of the most interesting subplots include the human past of Sebastian, the imminent vampire war and, the story of Anima King, Matteo and his love interest, Rachel.

Almost all of the characters have a certain charisma. I loved Charlie – she is stubborn, brave and unlike most other vampire romance heroines, she is independent too. Sebastian is a guy who the reader falls in love with gradually. He is humble, passionate and has a certain intensity about him that clicks with the readers. Some other characters worth their weight are Opal, Matteo, and Seraphina.

What about the climax?

The climax leaves the reader wanting more. At the end of it, there are definitely more questions than answers. The stage is set for an eventful and raging vampire war and there is much more to look forward to in part 2 of the Blood Eternal series. The only thing that I did not like about the climax was that it ended on a sweet (but temporarily so) note. I would have loved it if the author had left the story with a cliffhanger.

Is the book entertaining?

There is no question denying the fact that Risen (Blood Eternal #1) is an entertaining read. It’s a fantastic new story out there for lovers of vampire fiction and it surely doesn’t disappoint. I thus rate the book 4 out of 5 stars in entertainment quotient.

I also enjoyed the fact that in addition to vampires, this book also features fairies, dhampirs, magic and other elements of fantasy fiction.

The only thing that I did not like about Risen (Blood Eternal #1) is that it sets the expectations too high. When I first looked it up on Goodreads, I was amazed by the below words.

This set my expectations too high and, in the end, I was a tad disappointed only because of this.

Pick up Risen (Blood Eternal #1) if

Can’t wait to read it? Buy your copy at the link below.