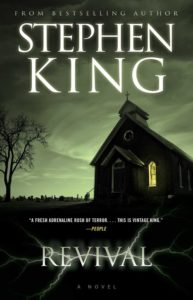 Stephen King is a well-known author, prolifically writing horror stories, suspense and fantasy novels. When you find out that Mr. King has come out with another book, you mostly tend to think it is yet another story that is going to scare the pants off you. Well, maybe, a few of his novels recently have not been as scary as in the past, but with his latest book, you can probably consign your opinion of him going soft into the dust bin, because this one is as dark as ever.

In “Revival”, Stephen King tells the story of small town lad Jamie Morton and his encounters with his local church’s minister Charles Jacobs. Jacobs has a major influence on a young Morton, especially with is twin passions, religion and electricity. He shows the town’s youngsters his gimmicks with electricity and also proclaims that “electricity is one of God’s doorways to the infinite”. He even uses electricity to bring back the voice of Jamie’s brother that was lost in an accident, despite everyone giving up that it could ever return. Everything seemed to be going well for the young Jamie, and he was looking forward to learning more from Jacobs, with whom he had a special bond until tragedy struck.

The minister’s wife and child die in an unfortunate road accident that leaves Jacobs shattered, so much so that he denounces religion in his final sermon in the town before leaving the place for good. Jamie, losing his mentor, kind of drifts off in his life, playing as a rhythm guitarist in whichever band he could find a place in, but mostly spending time high on drugs. At a chance encounter in a fair, he meets up with his old mentor Jacobs, doing party tricks with electricity and trying to earn a living. Jacobs tries to set him straight from his drug addiction using electricity, and once again a bond is forged between them.

In what looks like a coming of age story of Jamie Morton fast descends into a dark narration and horror. Without giving away the direction the characters in the book, it is safe to say that the climax is perhaps one of the best written by Stephen King in some time, and it is a climax that you would not see coming. The characters and the plot are impeccable as usual, and the narration is especially a sucker punch as you begin to believe that is just a normal story without any horror underpinnings to it.

Another must read affair from the king of horror, Stephen King. Read this before he releases his next book, coming out in June.